The old grey mare, she ain't what she used to be The first Windsor Chair I made with Curtis Buchanan, I used hide glue. I have to admit it was my first introduction to the stuff and by the time I had finished gluing up the legs and stretchers I was well and truly intimidated. You see Curtis mixed his own brew from granulated glue pellets. He then spoke of differing gram strengths, retardation by way of salt, etc etc. At that point all I knew of the stuff was that it was generally made of horse or cow bits and or, as Jack Plane just posted.... The Easter Bunny

At that point Charlie, who was making a chair at the same time, had the misfortune to glue the wrong end of his stretcher into a leg. He realised his mistake the split second he did it. Curtis immediately grabbed that leg and stretcher and wailed on the joint with a dead blow mallet like a man possessed, trying to get it apart. It was a fearsome assault on the leg! I stood there slack jawed and speechless.

The joint held true, didn't even look like budging and shortly after the leg had to cut off the stretcher on the bandsaw and the leg re-turned on the lathe. Wow. That horse sauce had some grip and the tack time was lightening quick. So much so that it put me off the stuff for ages. 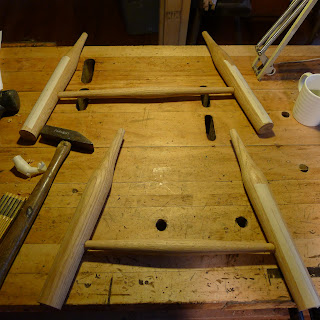 Fast forward a few years and I found myself back in the U.S. and in Pete Galbert's workshop. Enter the  hide glue! But before I could work myself into a frenzy about the stuff, Pete showed me the bottle from which it came. Old Brown Glue. Pete swore by it. I glued the stretchers into the legs without issue and with a much more relaxed tack time too.

I went on to use it on all three of the classes that Pete taught when he was out here in Australia. We glued up over 30 chairs and stools in that time, with out so much as one glue related issue. I have since used it exclusively on every chair I've made, all my chair classes and I recommend it to anyone who asks. It really is that good.

Why am I so shamelessly promoting Old Brown Glue I hear you ask? Well that's what you do when you sell the stuff and I'm very proud to say that's just what Lisa and I are now doing as the Australian distributors.

Available in both 5oz and 20oz bottles we have our first shipment on the shelf in the shop already and available for all the budding chair makers out there. How much?  I hear you say.... $10 for the 5oz and $22 for the 20oz. So cheaper than you can purchase it from the U.S. and get it posted out here. No we are not hell bent on making our fortune from glue! And that's exactly how we want it to be. Readily available and not a price where you have to auction off a body part to afford it.

And it's not just for the chair makers either. Developed by Patrick Edwards, one of America's best marquetry experts it is the ants pants for veneering ( and all manner of other furniture making applications! ) and it's about the only glue around that is reversible too. I could waffle on for ever about how good it is, but instead, see for yourself by heading to their website - Old Brown Glue

So if your in the area, stop in and get yourself and bottle.