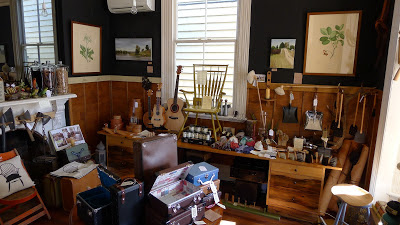 We are very fortunate to have such talented artisans supplying us with their work to sell in our shop, Rundell & Rundell. From Coopers, to spoon carvers, Archibald Prize finalist oil painters to Master Armourers. The list goes on.

So I thought I might introduce you all to a few of them over the next couple of months. The people behind the amazing products. 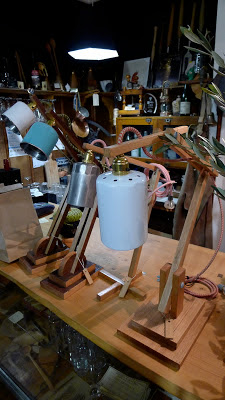 Pete Trott has been supplying us with his beautiful desk and floor lamps, under the name of 'Von Trott,' pretty much since we opened. A Lauriston local, Pete is a very talented sculptor and works as a set designer and builder for film and theatre. 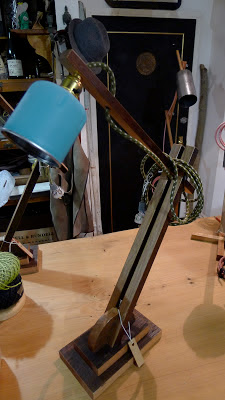 The lamp frames are made from recycled timber and the shades from.....anyone? anyone? Look closely. Yes, recycled oil filters, which have been carefully stripped back and enamelled to form an excellent shade. 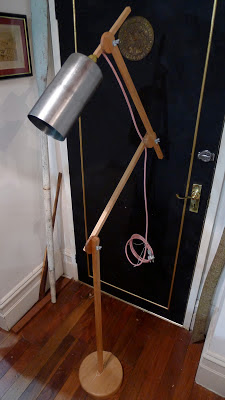 ...or left as brushed steel like this floor lamp.

They are usually made in pairs or as individual lamps. Each one is unique. Hand made and very well made. Vintage style cord finishes them perfectly. And as quickly as they come into the store they head out the door to a new home just as rapidly. 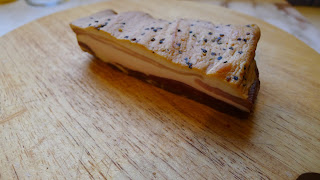 But Pete's talents don't stop there. When he arrived the other day he also had some other very impressive cargo on board. Again, hand made. Bacon!

And not just any old Bacon, this streaky bacon is the best I have tasted. Full stop. By a country mile. And believe me, I've had my fair share of the stuff.

Cured by Pete using a recipe I best not divulge, it was smoked for 7 hours in this beauty.... 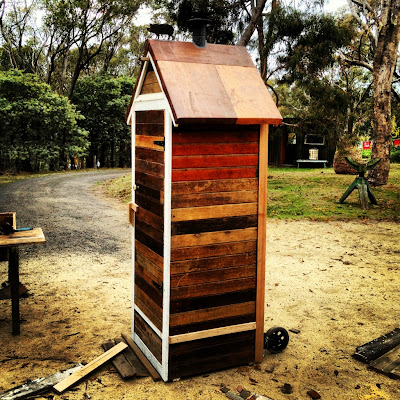 Again, using recycled timber and complete with a cast iron wheel for portability. The copper roof and porker on top are literally the icing on the cake. This is what country living is all about! Great stuff Pete. 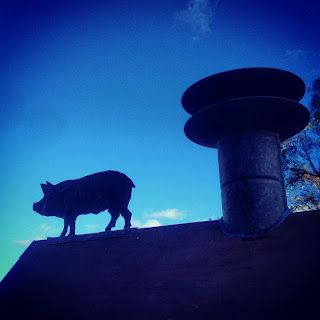 When's the next delivery??

Posted by Glen Rundell at 21:24 No comments: 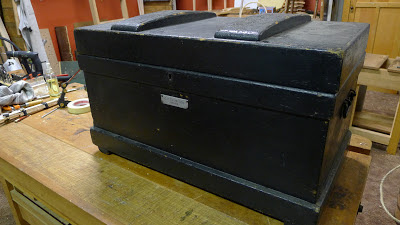 C.R. Thompson was a Patternmaker who apparently worked the the famous H.V.Mc Kay company in Sunshine. He also worked for the Commonwealth Aircraft Corporation.

This was his tool chest. It's a great example.

I'm looking for any information I can find about C.R. Thompson's life and history. Anyone who may have known of him I'd be very interested to talk to you. More to come on this one......
Posted by Glen Rundell at 07:39 No comments: 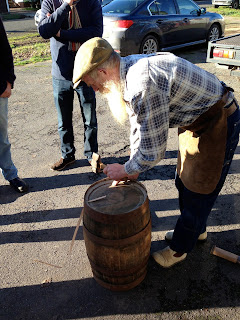 On Saturday George Smithwick rolled into town again for our second Coopered Bucket Course. A perfect Winters day with the fire going in the workshop set the scene for another entertaining and informative day of Coopering.

Before long the workshop was a hive of activity, with staves being shaved, hoops bent and riveted on the Bick Iron and the heads ( the base ) being measured, cut and shaved to size. Not forgetting a special delivery of, our neighbour Louise's, home baked chocolate eclairs for morning tea!

It's inspiring to see 6 people who, prior to attending the workshop, had most probably not even heard of the coopering tools they were now wielding and see them start to take ownership of the bucket that was appearing before their eyes.

There was a pride in workmanship too, people being particular in ensuring the rivets in the hoops lined up and that the hoops were straight and parallel. Great to watch. This short grab of video was indicative of the buzz in the workshop for most of the day.

I'd taken a few more videos of George demonstrating various Coopering techniques throughout the day, but I had enough trouble loading the one above after 6 attempts that I gave up. Perhaps I might try to get them on U-tube and post a link. George really is great to watch.

At the end of the day there were 6 watertight buckets and 6 very happy bucket makers. George and I both had a great day too and have tentatively arranged for another course this September. Just like this and the previous course, they book out quick, with two people having already put their names down  yesterday after hearing all about it. If you're interested, throw your hat in the ring quickly as the other 4 spots wont last long. Cheers.

Posted by Glen Rundell at 07:26 No comments:

When we opened the door to our business late last year, we realised even then that a very large part of our time would be spent not only making the stock for our store, but also, for want of a better word, gently 'educating' our customers as to why they should purchase what we and other local artisans made. What set our products apart, made them special.

Some ( most ) days it's really quite easy, people just get it,. On other occasions it can be like watching a dog listening to the radio. It's really not surprising when you consider that we have been conditioned for years to look for the lowest price we can. A bit of human nature.

We scour the internet not looking for the best, but the cheapest. Hardware catalogues spruiking circular saws for $49, mega Euro furniture stores advertising household furniture items for a tenth of what they might have ordinarily cost. To each their own as they say, but some days I do dismay at the level of landfill we are contributing to. The waste and senseless use of materials, often the wrong materials too.

So where am I going with this? I guess what I'm saying is that we cant expect to the greater community to be any better informed, unless they are informed. 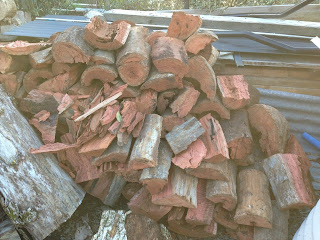 On Friday, for the first time in my life I bought firewood. It's Winter and having the open fire burning in the bar on Friday and Saturday night, churns through a fair bit of wood. More than I can keep up to from workshop scrap. So I ordered a cubic metre of Redgum and it was delivered shortly afterwards and dumped in the back yard. 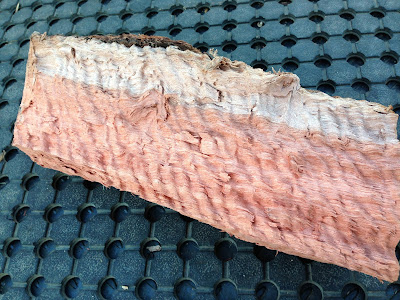 And there it was, a big pile of fiddleback Redgum. Fiddleback as good as it gets. Cut up for firewood. Worse still, given what I had to pay for the stuff and the way its chopped up, I've got not much choice but to burn it! ( Ok, I've squirrelled away a half a dozen bits to make chisel handles! ) 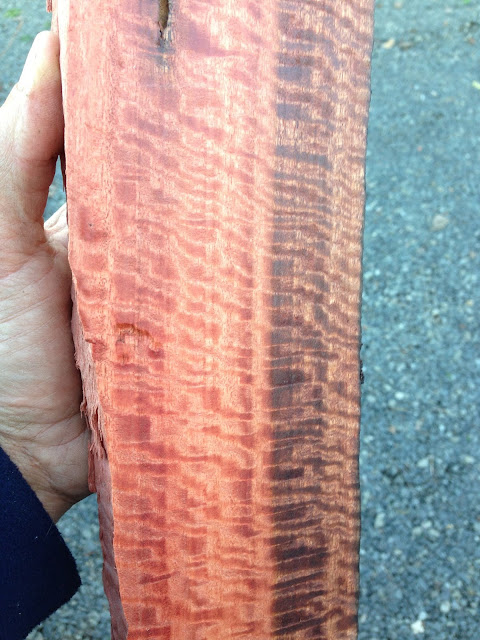 I couldn't resist running it over the jointer and rubbing in a bit of oil. Nice firewood eh?

In the U.S. this stuff would be milled and sold to furniture makers as highly figured lumber. It reflects their appreciation of fine furniture too. Here in good 'ol Oz, we burn it, shove it under railway tracks or make fence posts out of it.

What can you expect though if people don't know any better? If they cant distinguish highly figured timber from......firewood. Please don't take it as anti Australian sentiment, it's expressed more from a sense of disappointment than anything else.

Anyway, enough of me on the soapbox, I've got a fire to light.

The next leg of the journey. 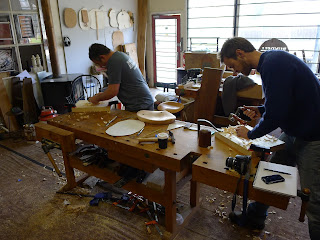 I had the Daniel and Adam in the workshop over the weekend making a Perch each. They both turned out great chairs ( sorry, but I just don't enjoy calling them stools. You get the picture.... ) and I was especially pleased that they each chose to shape their seats differently.

Adam chose the shape that I first started to carve when Pete Galbert showed me how to make them. Whereas Daniel chose a shape that I have since gravitated to, where the back bevel of the seat tapers to a slender point at the side , leaving the actual seat of the Perch slightly flatter. Both looked great. Daniel chose to spokeshave facets onto the legs after turning them, giving them a very natural and earthy effect. Nice. 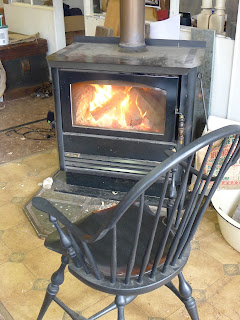 Another pleasant aspect of the new workshop is the wood heater. Very comfortable in Winter  if I do say so myself.

During my time away and whilst teaching this last class I've been thinking more about some of the designs I have drawn over the past year and have yet to experiment with. I enjoy making continuous arm chairs, crested rockers, perches and the like but I find myself leaning more and more towards exploring other designs and more importantly, designs of my own. I think I will always be influenced by the people who have taught me to make chairs, but that's natural. Just like I'm sure Curtis Buchanan was heavily influenced by Dave Sawyer who taught him to make Windsors and so on.

So the first point of call on Tuesday morning was to reinvent a four legged bar stool ( errr )  that I had roughed in well over 12 months ago, but was disappointed with.

I was happy with the Elm seat shape but the original legs were slightly steam bent, which just didn't sit right and had too large a footprint on the floor. Secondly the front stretcher which doubled as the footrest was a typical 5/8" round mortise and tenon and I had reservations that eventually the racking force on the rest would eventually force the foot rest to pivot and become loose. 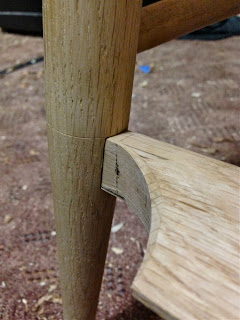 I started with a new set of four straight legs from some of the 40mm stock of English Oak I had from the Treasury Gardens tree. Next was the racking issue. So a chopped a 12 x 25mm  (1/2" x 1" ) rectangular mortise in the front legs then shaped a new aerofoil inspired rest to fit. This was followed with a standard box stretcher setup for the rest of the legs. 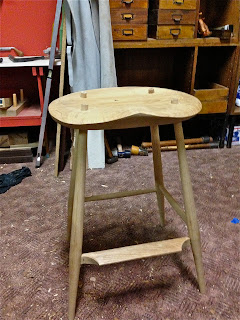 When dry assembled this stretcher setup was rock solid. I even stood on the leading edge of the foot rest to make sure. It didn't so much as even creak under the pressure. There's some fine tuning of the seat, but in it's roughed in state, I have to say I'm fairly happy with it.

This weekend we have George Smithwick from Beveridge Coopers at the workshop again for our Coopered Bucket Course. It promises to be a great day. So plenty of inspiration to come...

A good friend sent this to me a while back and I've been meaning to post it on the blog for some time. It has to be one of the most incredible films of Melbourne in it's heyday, circa 1910. It runs for a while, but for all of those Melbourne-ites out there ( and visitors to Melbourne ), it's  great to pick the various city icons and see just how much our wonderful city has transformed and conversely, remained unchanged. I hope you enjoy it! 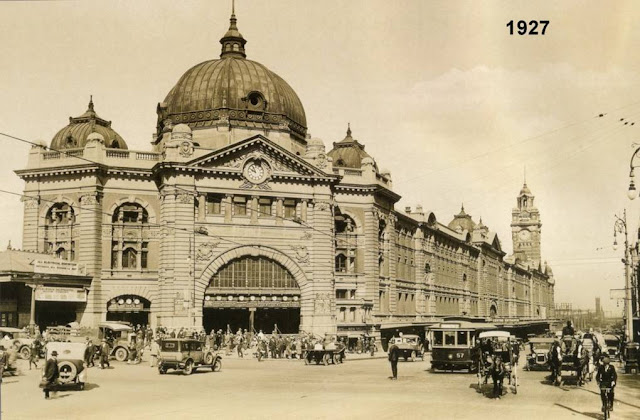 Posted by Glen Rundell at 00:27 No comments: 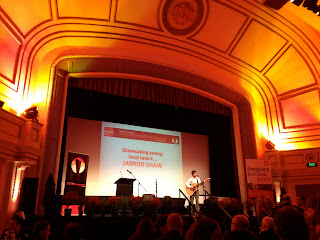 Last night Lisa and I went out for dinner at the Kyneton Town Hall.....with another 100 or so local business owners and operators from the Macedon Ranges.
We had been nominated, by person/s unknown, for the Excellence in New Business Award and I'm very proud to say we won.

As per usual neither Lisa or I had prepared a speech.......so we just thanked everyone. It's a welcome pat on the back and validation for our small business which is still in relative infancy, given we've only been up and running for 6 months. 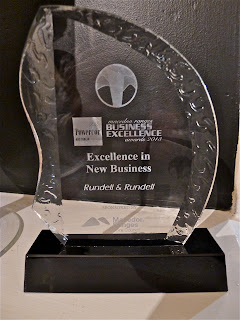 There's still a lot to do before Rundell & Rundell reaches our full expectations. A small part being the opening of our new front room at the shop. It's a dedicated Winter lounge, with an open fire, leather lounges and arm chairs and even an original English Hood Skittles table for people to enjoy a game or two over a beer, cider or perhaps a glass of Lisa's mulled wine.

I'll post a few photos of the new room tomorrow, when it has one or two people enjoying the space. If you're in the neighbourhood, be sure to drop in. Cheers!