Since the Lost Trades Fair a few weeks back we've run a few stool making courses in the workshop, including our first 4 legged Bar Stool course. 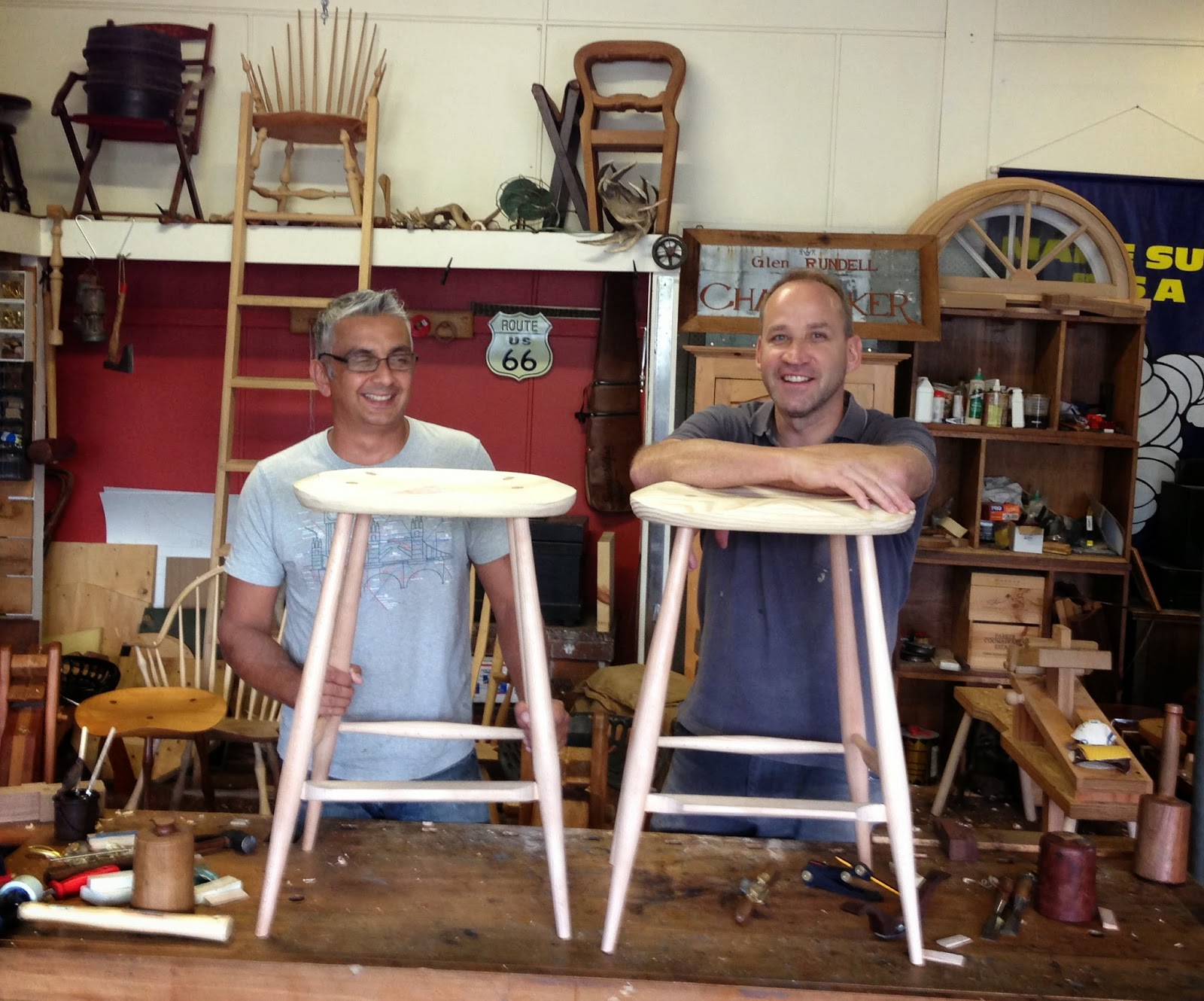 Clinton and Craig were both great to have in the workshop and over the four days ended up getting on like a house on fire, even bringing their finished barstools into the bar on the Thursday afternoon for a 'test run.' 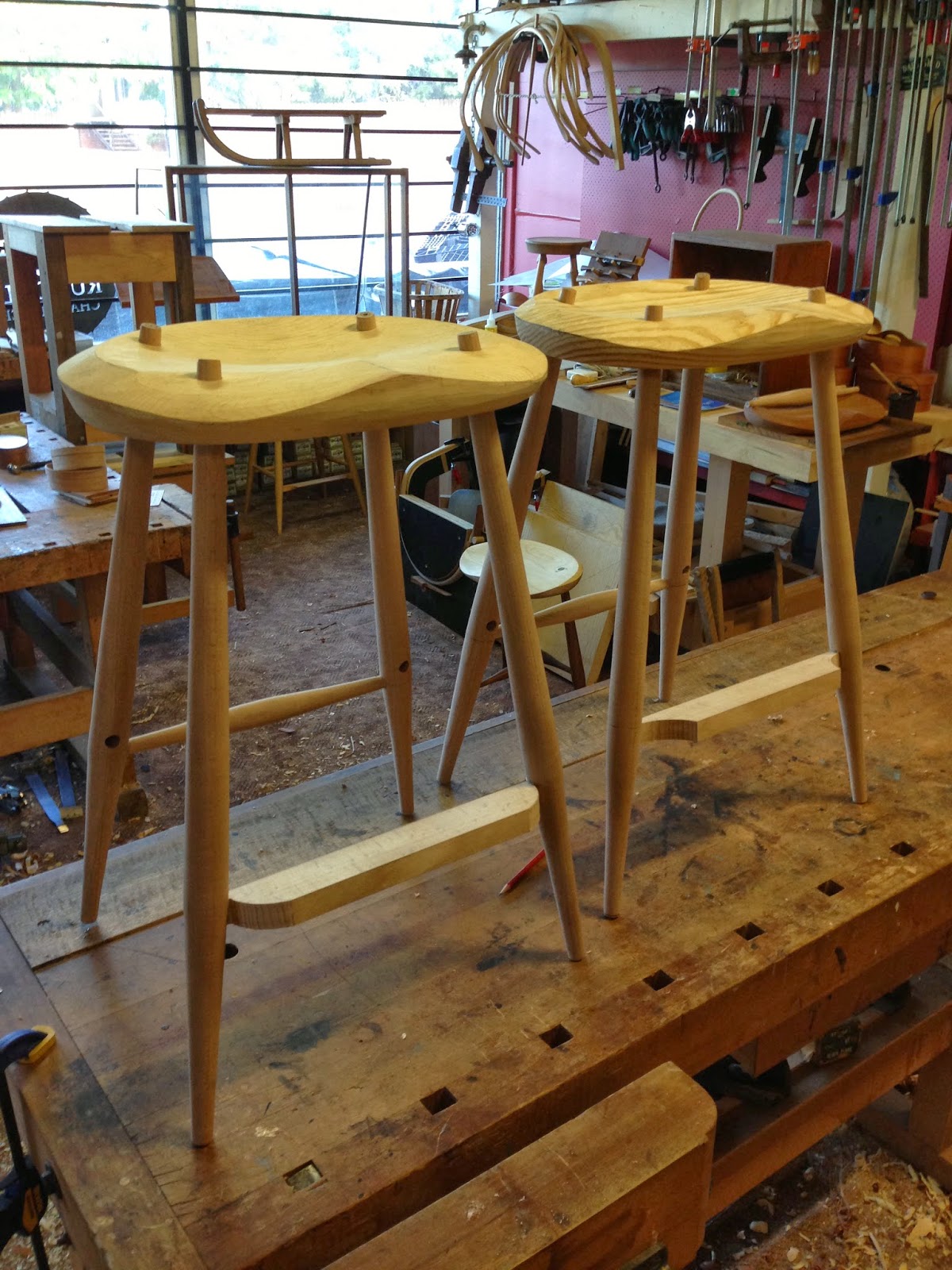 They also used a bit artistic licence in the shaping of the foot rest, Craig choosing a convex curve and Clinton concave. After seeing both together I'm still undecided on which I prefer. A good rectangular mortise and tenon ensuring the foot rests will never wrack and become loose.

Unlike the 'T' stretcher system of the Perch, the Bar Stool uses a 'box' stretcher setup, which although looking fairly straight forward does require a little more exacting marking out and accurate drilling, as being out by as little as a degree or so can throw the stretcher considerably out of line with the corresponding leg. No such issue this time around though, which was great. 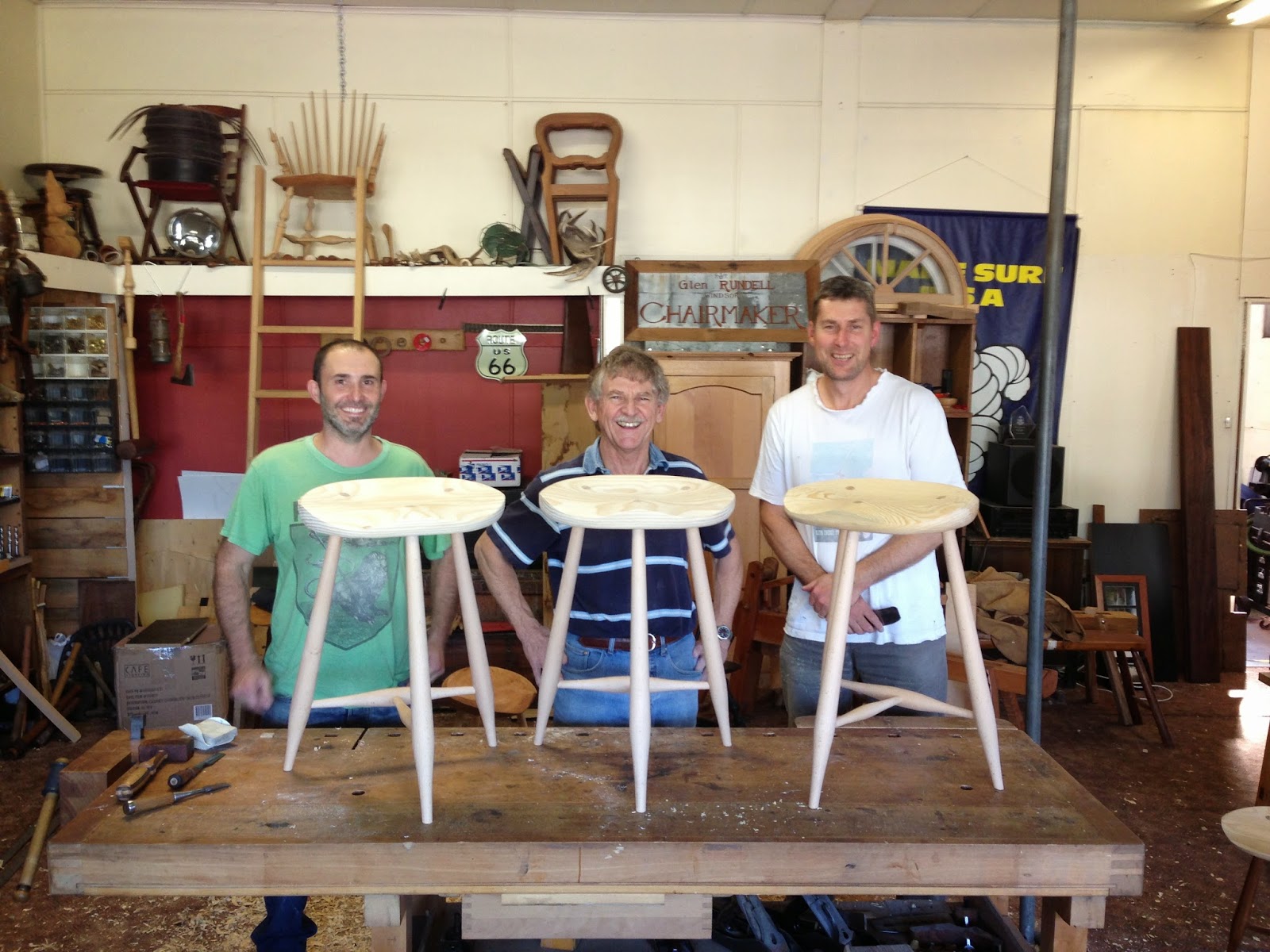 The following week saw Trevor, Adrian and Evan in the shop to make a Perch each. Again, 3 great guys and 3 very nice finished products. …. Coincidently I think one of the Perches made it into the bar for a test drive too. Is there a trend beginning here?!

In between courses and finishing off a rocking chair I've been back out at the house with Pete, fitting the weatherboards and our new casement windows. 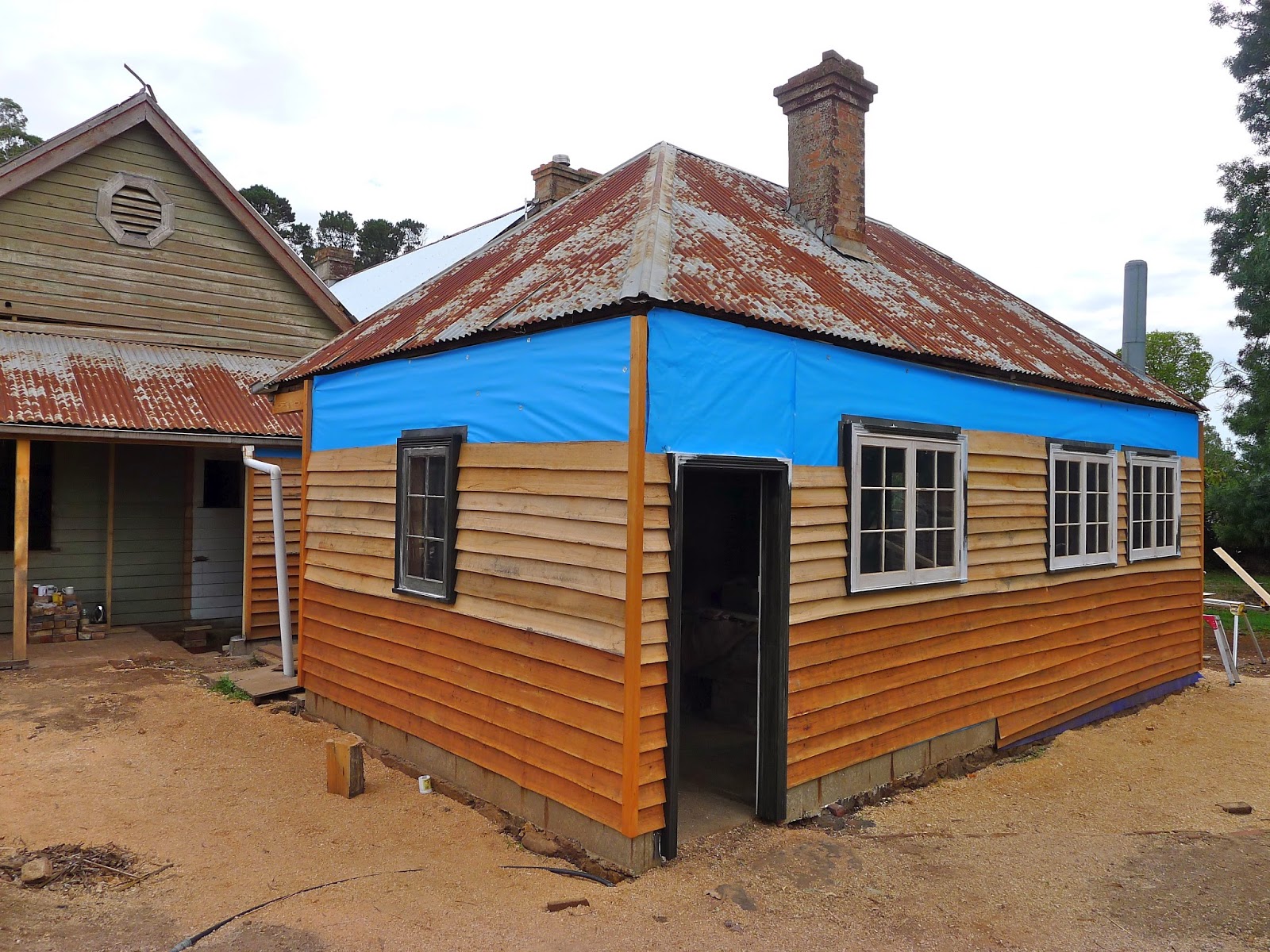 The top half boards are not yet oiled with 'Organoil' marine grade Tung oil.

I know, the blue sisalation paper is not a good look, but you can start to get a feel for how it's going to look. I'm folding up some metal flashings for the tops of the windows tomorrow night, then Friday we can finish cladding up to the roof line and fit the fascia.

The windows are a credit to Davies Joinery in Maryborough who made them, despite them taking a little longer to arrive than expected. We looked around for a good while to find someone who could still make the windows with the fine dividers or muntins, to match the original windows. 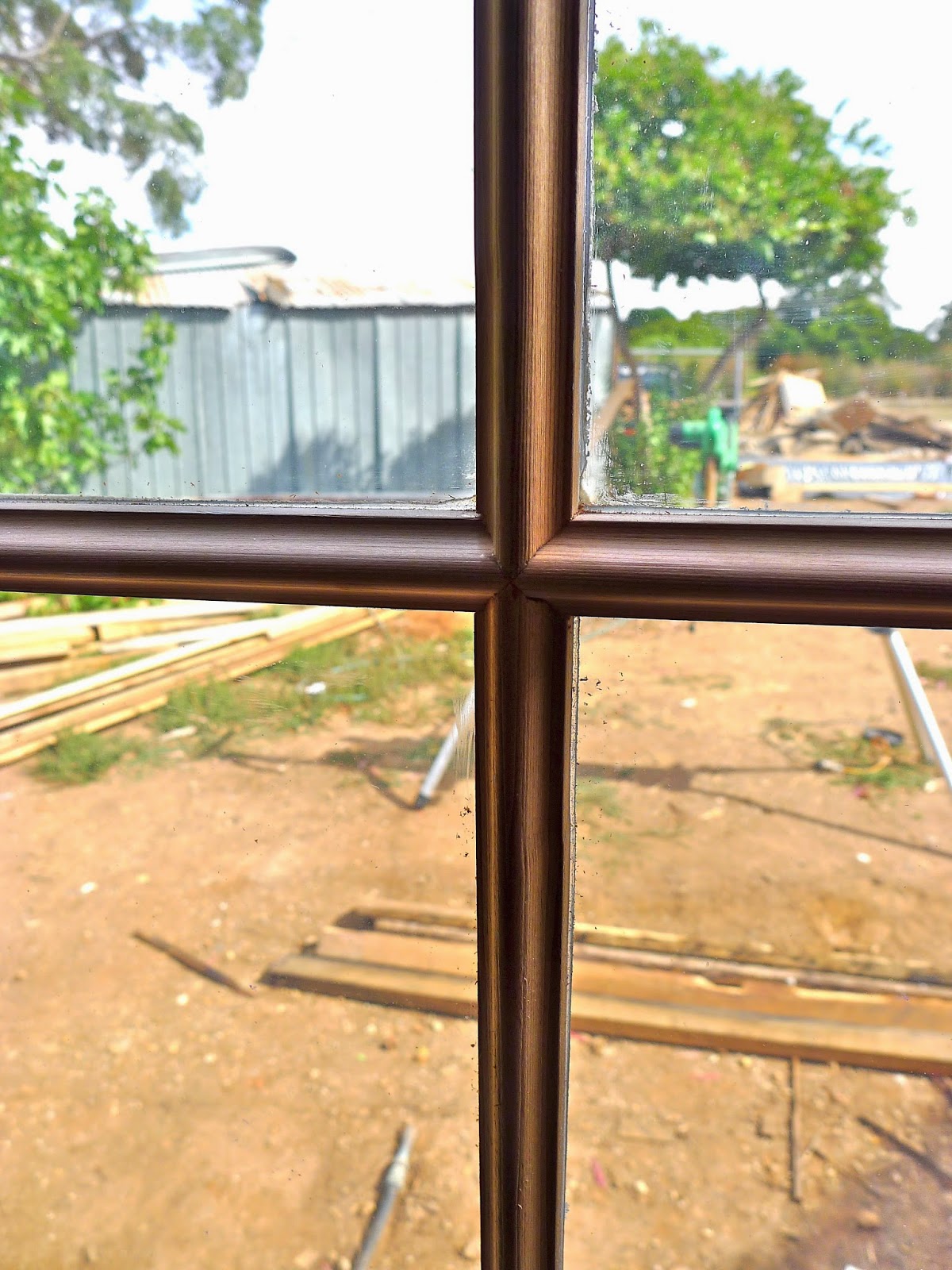 At 16mm or 5/8" they are quite fine and not many joiners will make them anymore. Painting those muntins on the other hand is a pain in the… muntin, but it will be worth it in the end.

There's a few changes in stall for the workshop too ( aside from cleaning it ) but there's more to come on that note soon…. Cheers.
Posted by Glen Rundell at 07:16 4 comments: