A bucket load of fun. 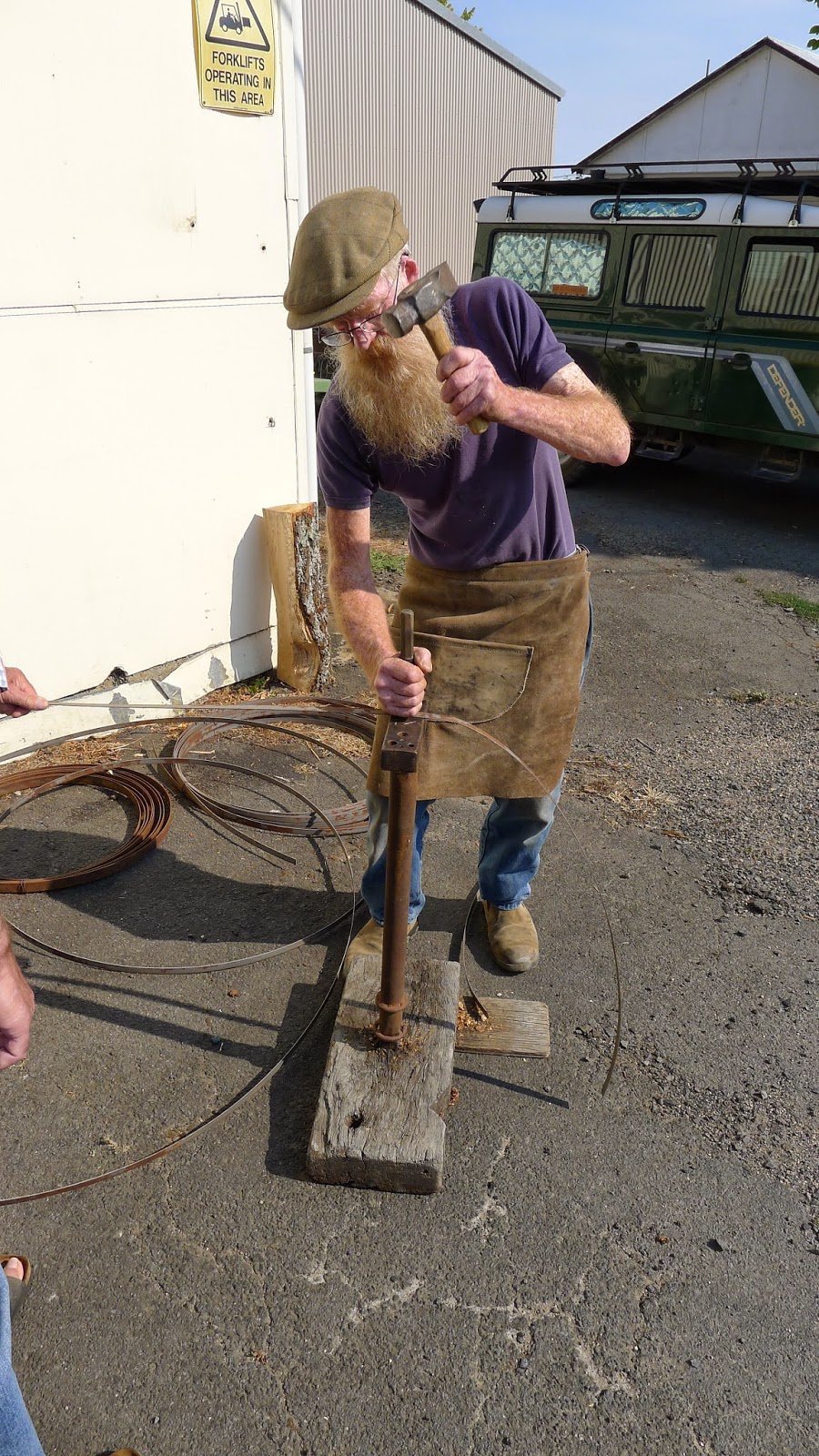 On a wet Saturday just gone, the familiar sight of George Smithwick's green Landrover came wheeling into the driveway, signalling the beginning of another Coopered Wooden Bucket Course. With a full house of 6, plus me as the gopher, George again skilfully took the guys from a pile of 18 staves, a head and a pile of hoop iron, to 6 fully functional great looking wooden buckets with spliced rope handles. Again there was not a single leak amongst them! 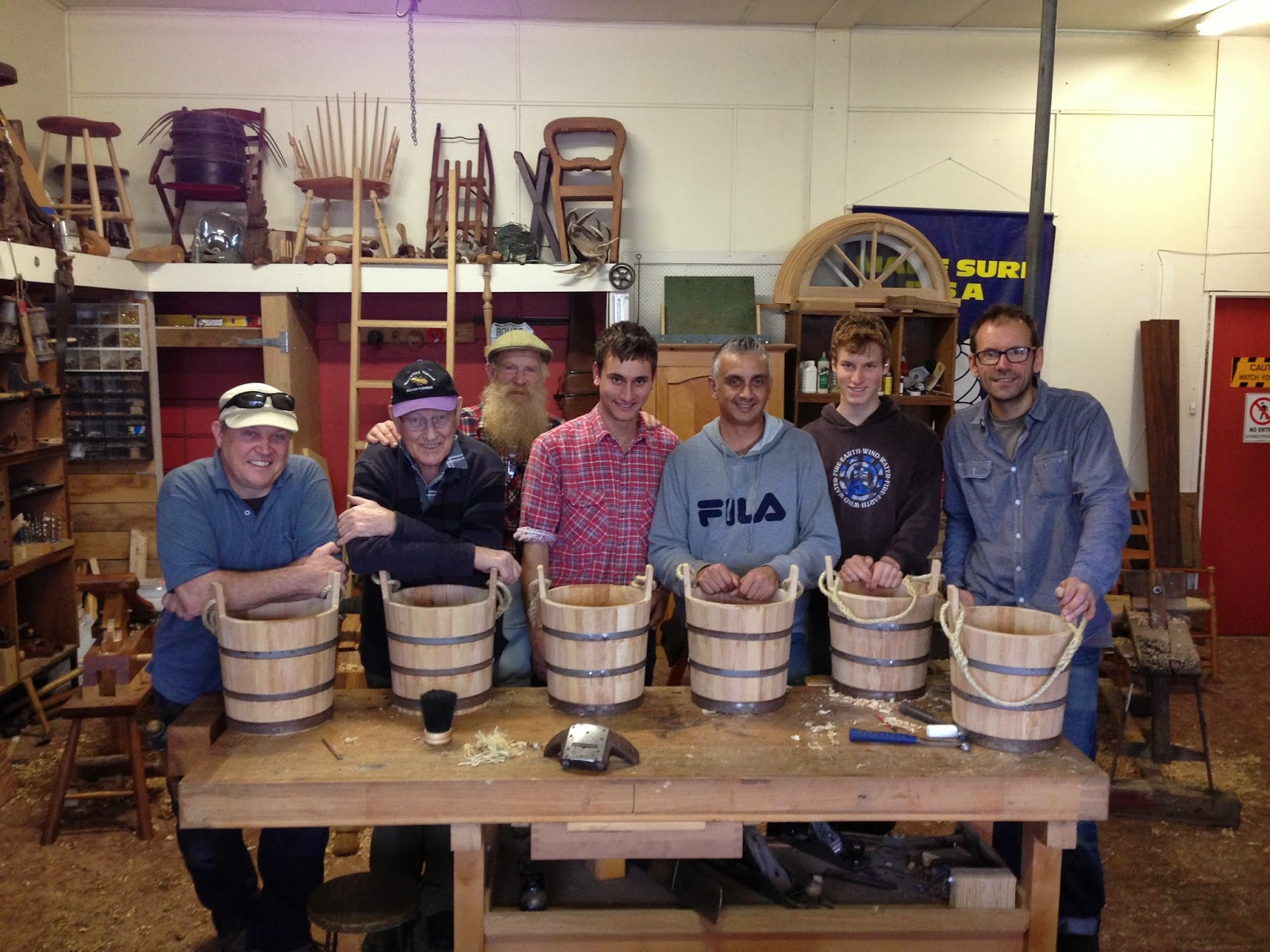 And just like the chair class, we had a great cross section of people taking part. From an amateur woodworker to a plumber and even a farrier, to name a few. We also had Doug and Craig as return customers from a Perch and Barstool course respectively. Great to have you back guys.

As with the chair courses, when you have a group of people on board who want to learn, it makes for an enjoyable time. When you add George into the mix it makes for an unforgettable day. He's just that sort of personality and such a natural teacher. Which brings me to my day in the workshop with him.

A few months back I was out on the usual early Saturday morning garage sale hunt with good mate Dave - Master garage sale purveyor. We had hit a small farm out on the Springhill Road and in amongst a largish pile of tat and other plastic landfill was a hefty looking little port barrel. 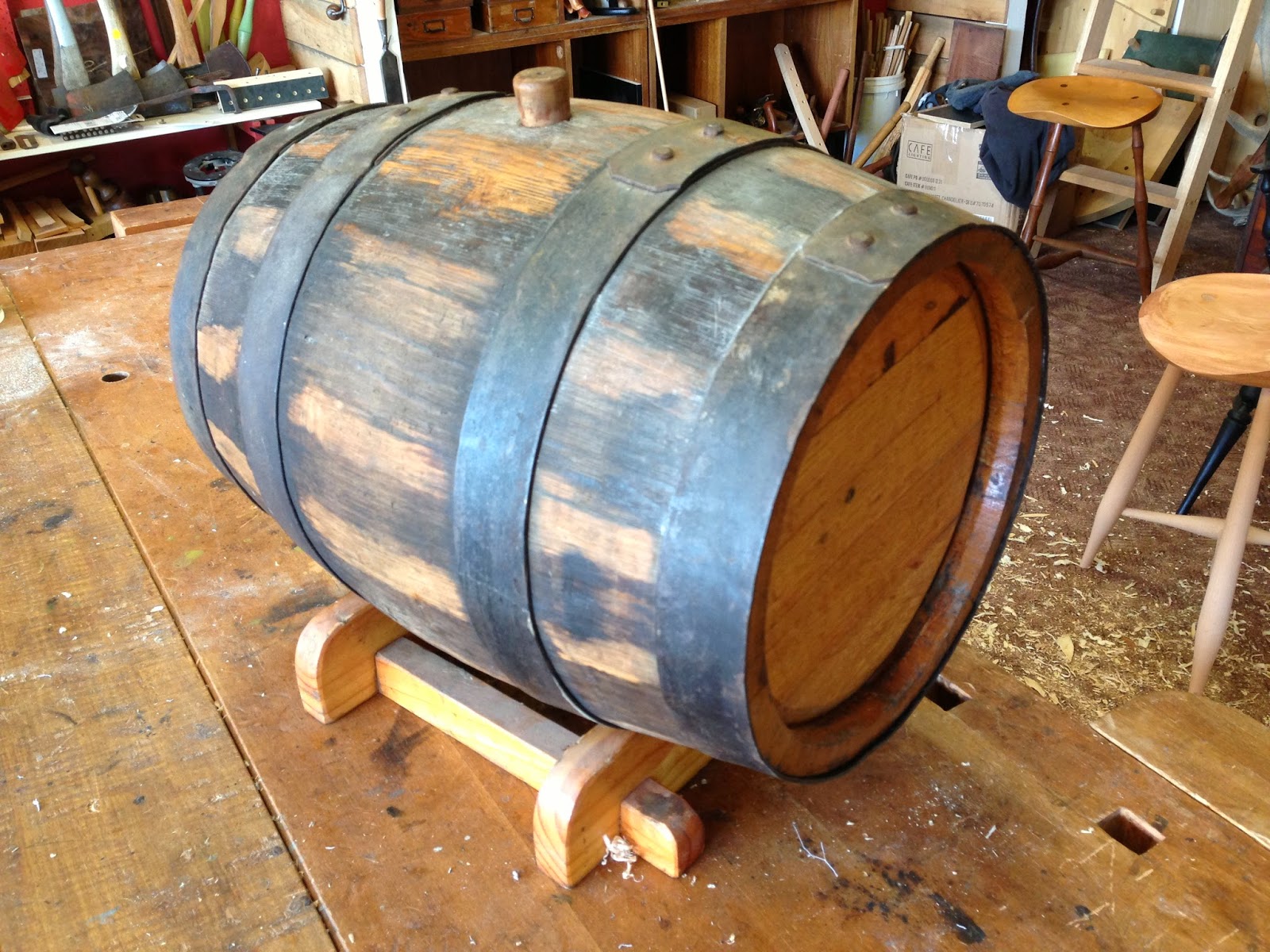 Not the usual mass produced suspect with tinny hoops and lacquered staves. This one had wide hand beaten hoops, thick, well formed staves and a host of other tool marks and indications that a coopers hand had made it, not a machine. Cash exchanged and the barrel was mine. Not all rosy though, as when I got it home and knocked the bung out, a wonderfully vinegar-y smell smacked me right in the face. Putrid. After a brief chat with George on the phone, I bought some citric acid and Metabisulfite steriliser to try and kill the smell and bring it back to usable condition. No such luck.

So when George arrived he used the little barrel as the sample to show the guys how each of the coopering tools are used, knocking the head out of it. A look inside showed that all of the staves were quite badly delaminated and there was a fine layer of mildew on everything. So the staves were numbered and I knocked the whole thing apart into a pile. Being such a small barrel, Georges inshaves wouldn't quite fit to shave the inner side of the stave, but James Mursell's travisher was perfect and in about 15 minutes I had them all shaved back to clean quarter sawn oak with a lovely purple tinge to them.

After 'standing them up' in the hoops to reassemble, I looked at the outside of the staves and the black iron marks and years of grot and decided that I probably should give them a quick shave too. Not so fast though as I ended up dulling four spokeshave blades in no time, such was the hardness and depth of the residue on the outside. But at least the barrel looked the part.

So the class had finished on record time and I looked to George to help me get the barrel back together. "You'll need a creset full of shavings to toast the barrel before we get it back together," he said.
"A whats-it?" I replied with a dumb look on my face. You know, like a dog looking at the radio. With no 'creset' handy, I ran around the workshop looking for something about the size of a 4 litre paint tin. No luck. In desperation I looked outside and straight through the door of our outside toilet. 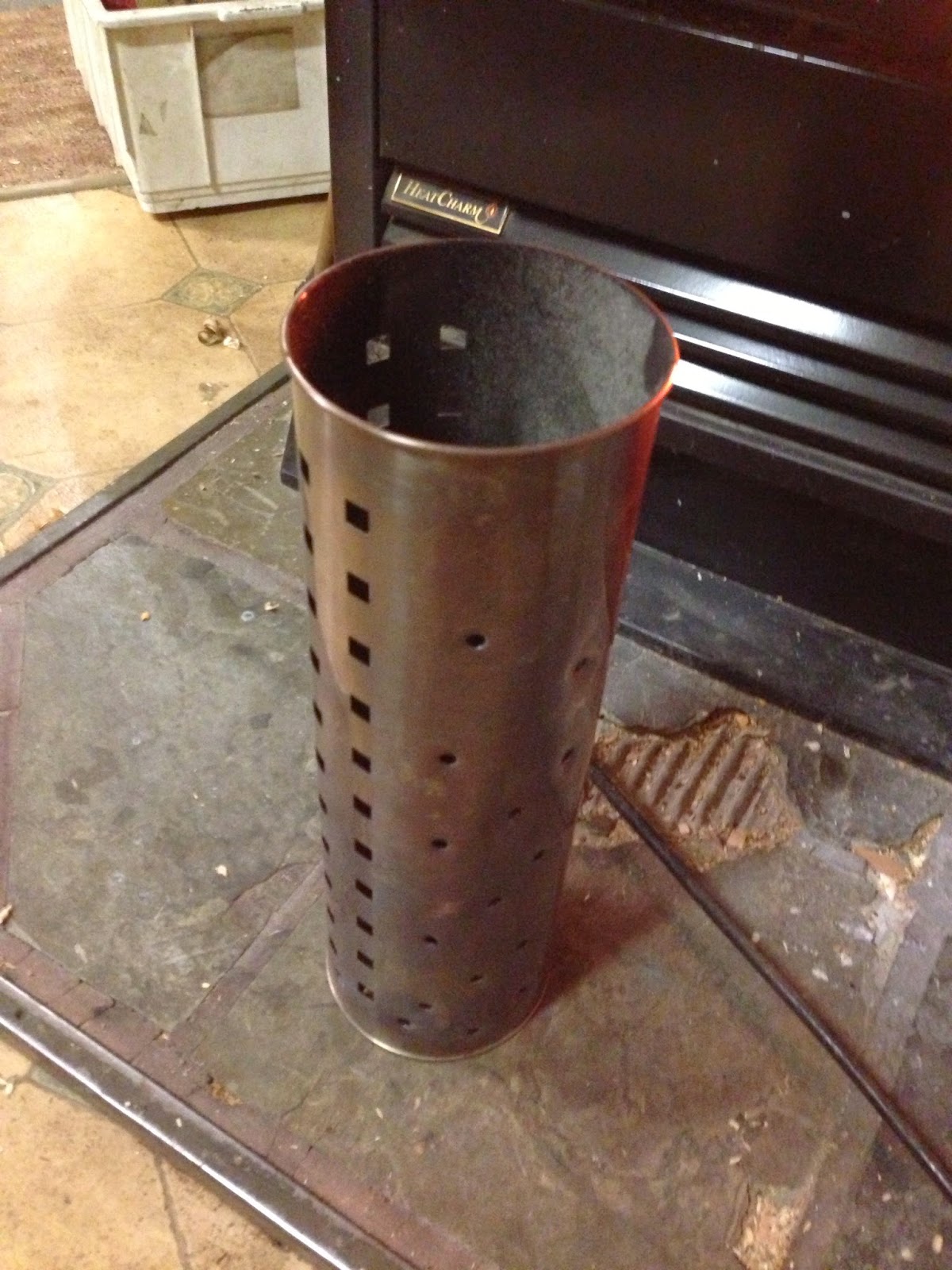 There it was, a tall made in China shiny metal toilet roll holder! Bingo. A few holes drilled up the side of it and presto. Instant creset!

So picture this. We have the open ended barrel propped up on some oak sticks on the hearth of the fireplace. Toilet roll holder creset in the middle and a shavings filled fire flaming out the top of it, inside the workshop! Tom was there running around, squealing and giggling in disbelief, " I can't believe we've got a fire inside the workshop!" EEEEHHHH HEEEE. Lisa pulls up out the front and walks inside, greeted by her elated giggling 6 year old, a thick haze of smoke at eye level and George and Glen toasting a barrel on the floor. Having fun are we? I merely grinned in reply. In fact so much fun that I completely forgot to snap an picture….

After a good while the steam started to seep from the staves and the inside of the barrel had a good deal of heat in it. I then watched as George coaxed the first head into place, followed by the other with the tap still in place.

The hoops driven back into position, a quantity of boiling water was then poured inside. "Quiet now," said George as he stood the barrel on end and put his ear to the head. At that stage I didn't know if he'd watched a few too many Western movies and was listening for a stampede.... But in all seriousness, he was listening for air, bubbles that is. And he heard one too, then another. He motioned me to do the same and a second or two after putting my ear to the head, there it was. A bubble audibly bubbling to the surface and popping. On checking the head there was a small weep.

As quick as you like, George knocked off the chime hoop, and loosened the quarter hoop and manipulated a sliver of Kabungi reed between the head and stave where the leak was, then drove the hoops back into place. Leak fixed. 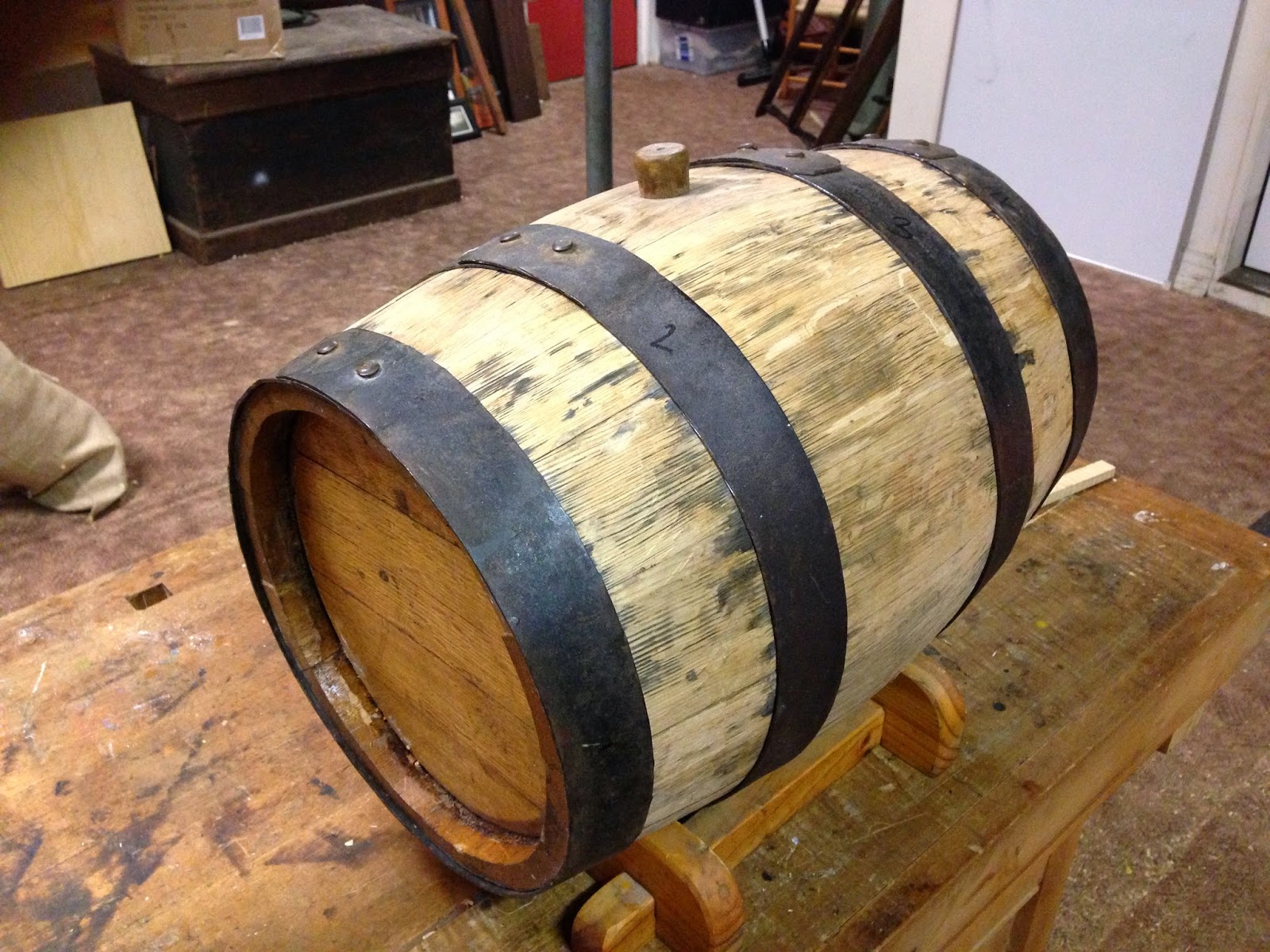 It was terrific to watch and now my next job is to get myself a barrel full of Old Madeira and enjoy over the next few years! Thanks George and well done guys.
Posted by Glen Rundell at 07:33 2 comments:

Not hungry any more?

It's been another couple of weeks of terrorising termites at Tylden and we now have all of the floors in nearly all rooms except the hallway removed. On removing plaster from the walls, then floorboards a similar pattern appears. 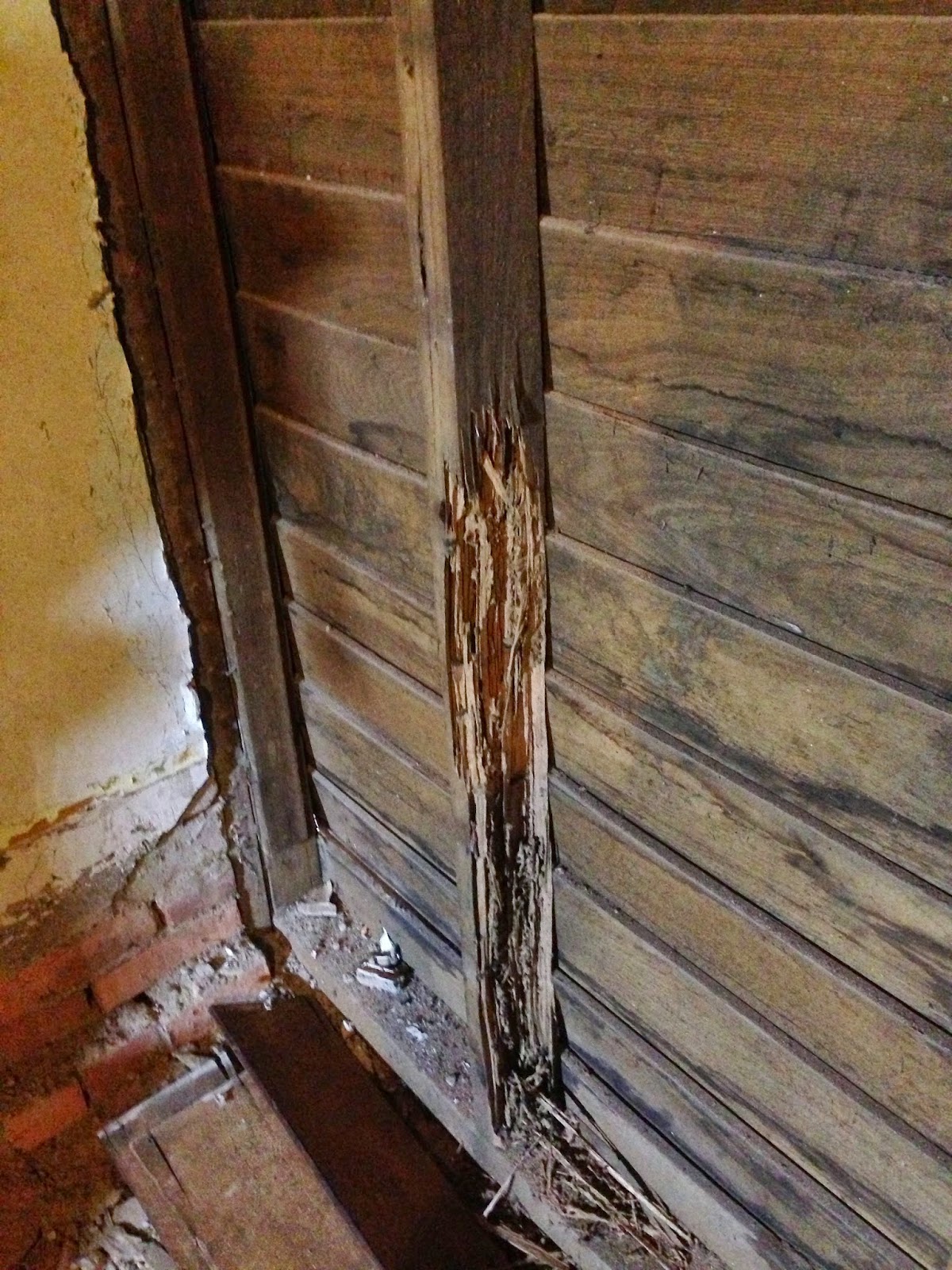 A bit of bottom plate chewed here, a section of top plate destroyed there and usually a couple of studs completely eaten.
But when you think there's rhyme and reason to their eating habits, you'll find a stud that has only been eaten half a metre from the floor or that they have carved a path through the centre of a 12mm thick weatherboard for 3 or 4 metres, ignoring all other timber that it attached too.

And just when we though we would have to rebuild every single wall and floor in the place, the last room in the house, on the North West corner, was left largely untouched. Just a small amount of damage on two of the corner posts. Perhaps it was due to the Northern aspect meaning the walls were drier and warmer than the others? 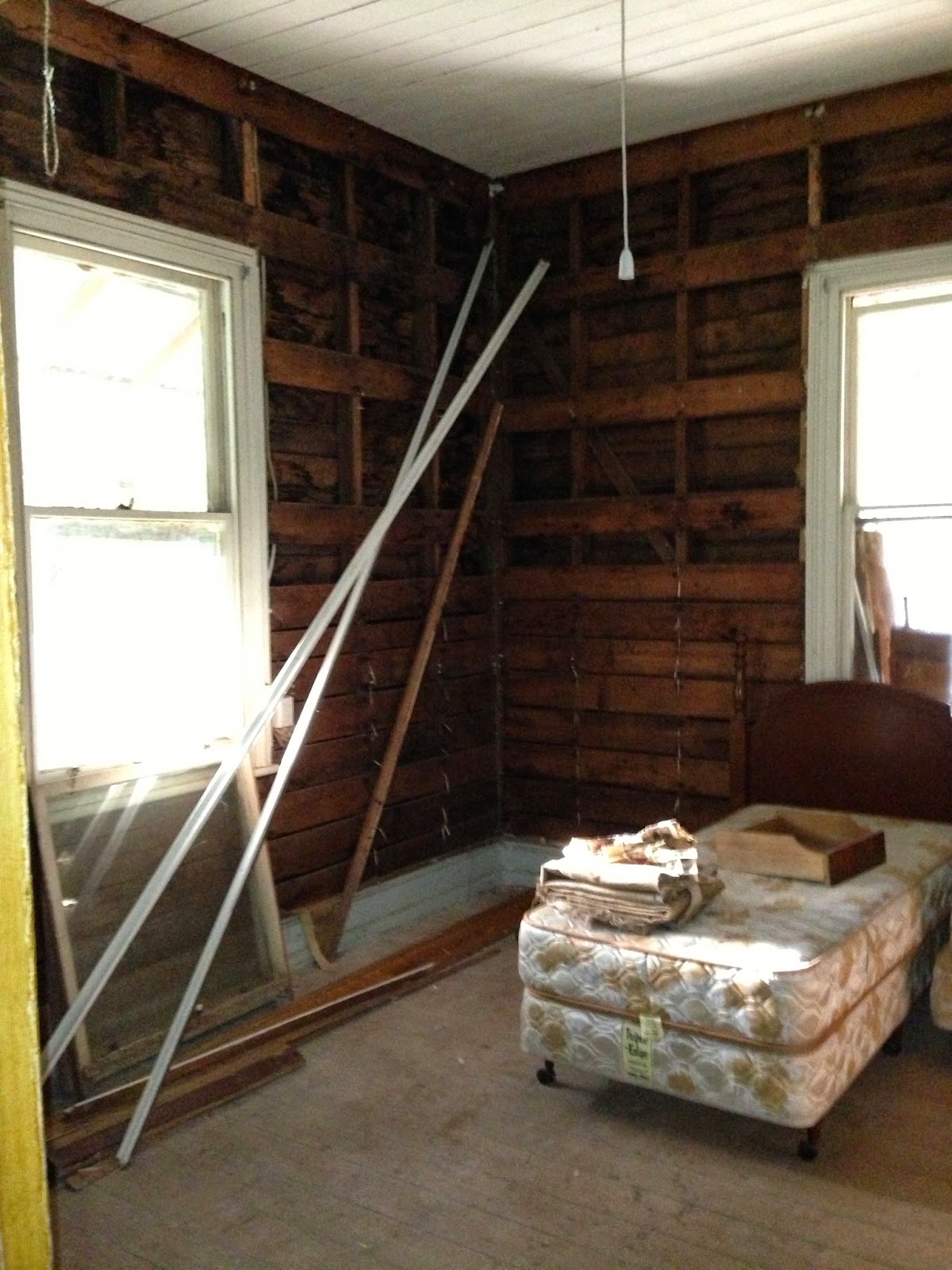 The 'uneaten' room? To hot for you eh?

Whatever the reason it was a great relief not to have to pull up another floor, joists and bearers and either burn them on the bonfire or cut them up for firewood.

In amongst the insect action, Bern and I also ran a Continuous Arm Chair class with 5 great people on board. Peter who had come down from Sydney for the week, Sue from just down the road and Hew from just out of town. Don from Melbourne and Dan from Ballarat. Again we ended up with 5 great looking chairs at the end of the week and five happy people with a better understanding of the just what is involved in making a Windsor chair. 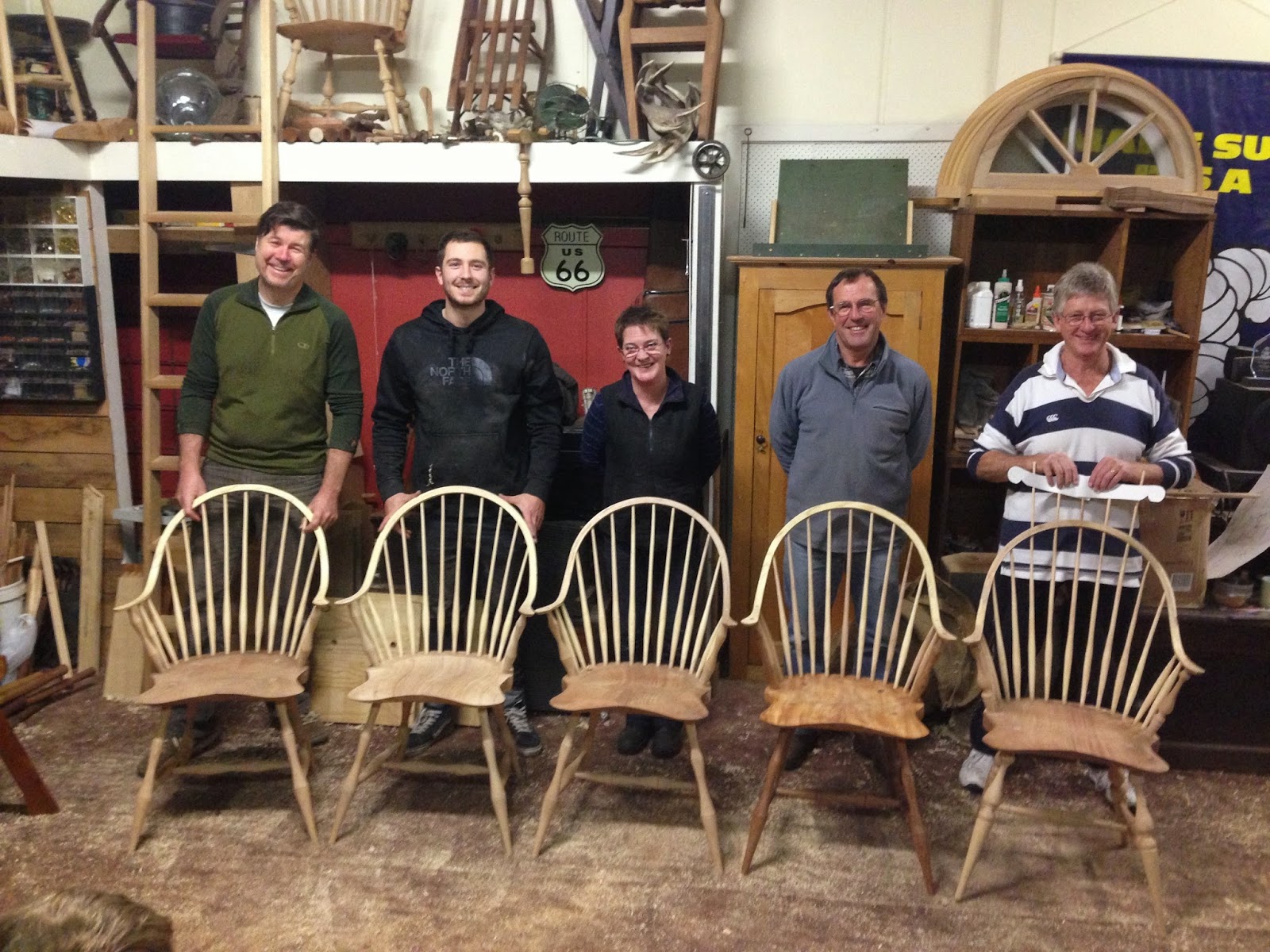 A terrific group of chairs and people. Cheers!

Posted by Glen Rundell at 06:32 No comments:

It's amazing what you find when you look

Stripping plaster of the wall in the hallway of the old house in Tylden. ….. 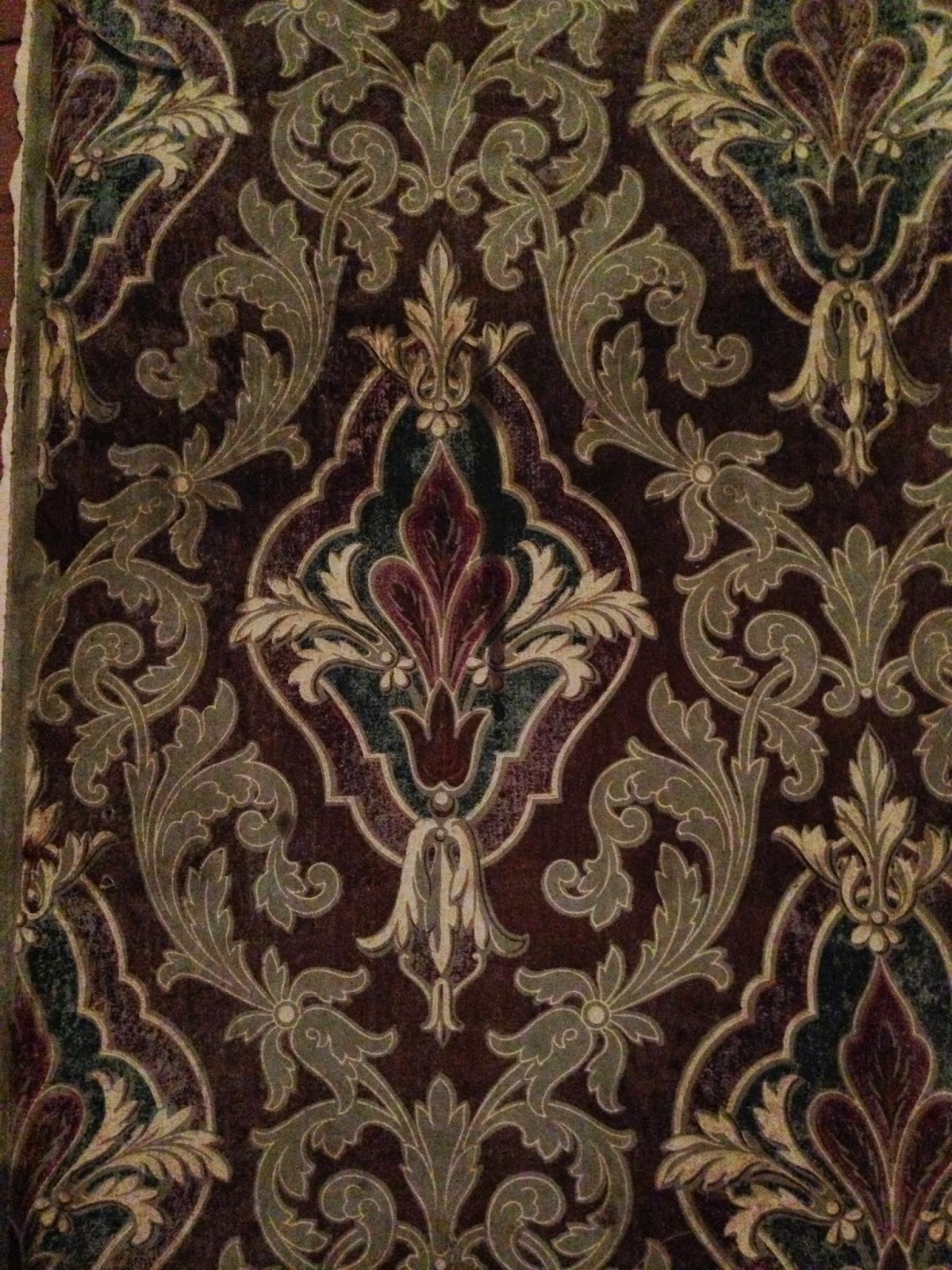 This wallpaper was actually stuck on backwards to the hessian on a wall as a base for the actual wallpaper being used. 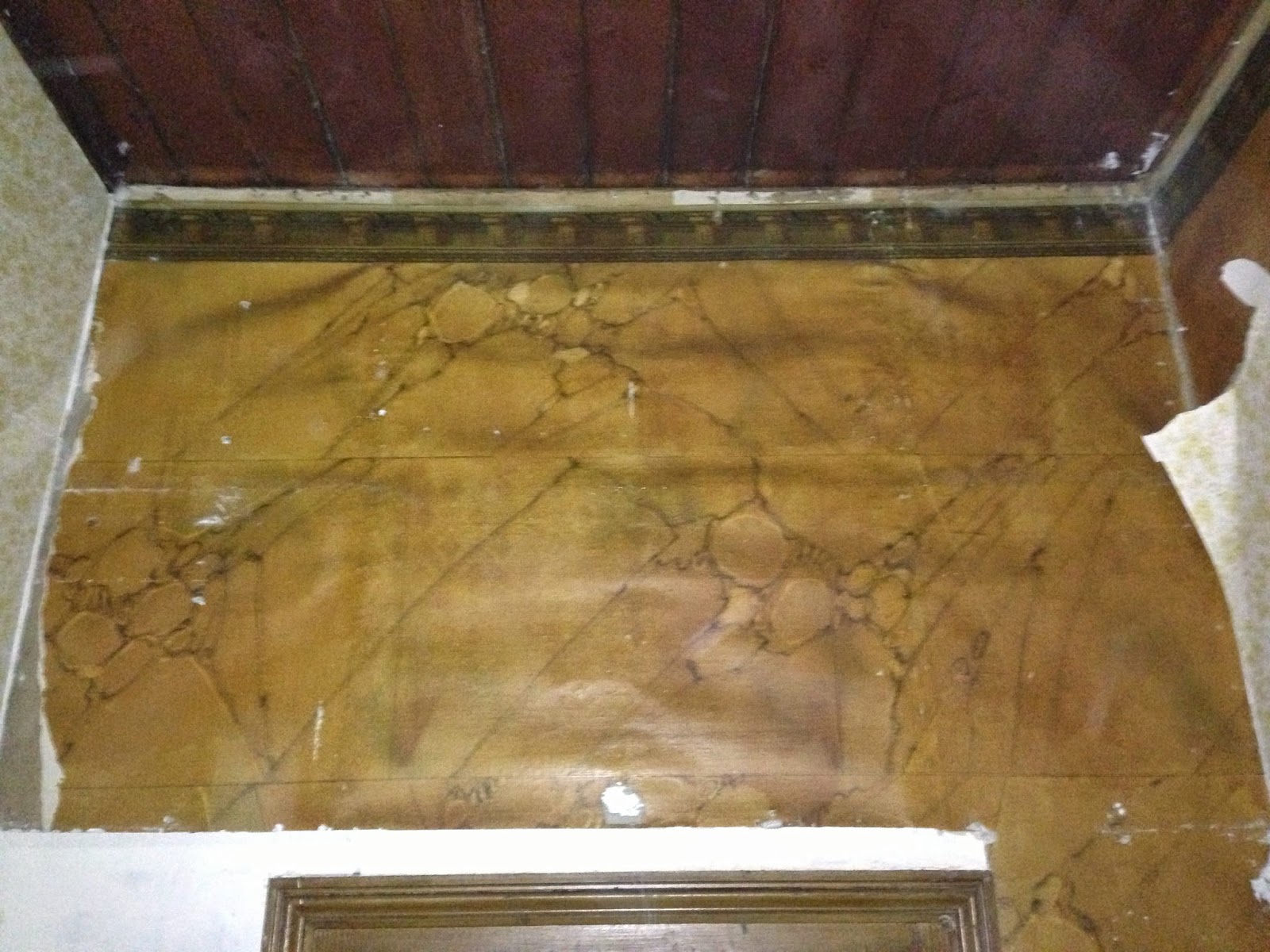 This is the hallway. We removed the plaster board to reveal hand painted faux stone block-work with a hand painted decorative frieze above. The detail is amazing. 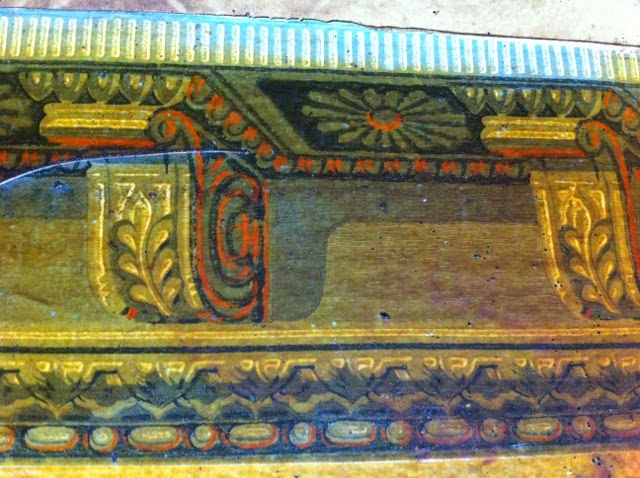 Hand painted frieze.
Posted by Glen Rundell at 08:07 No comments: