First cab off the rank 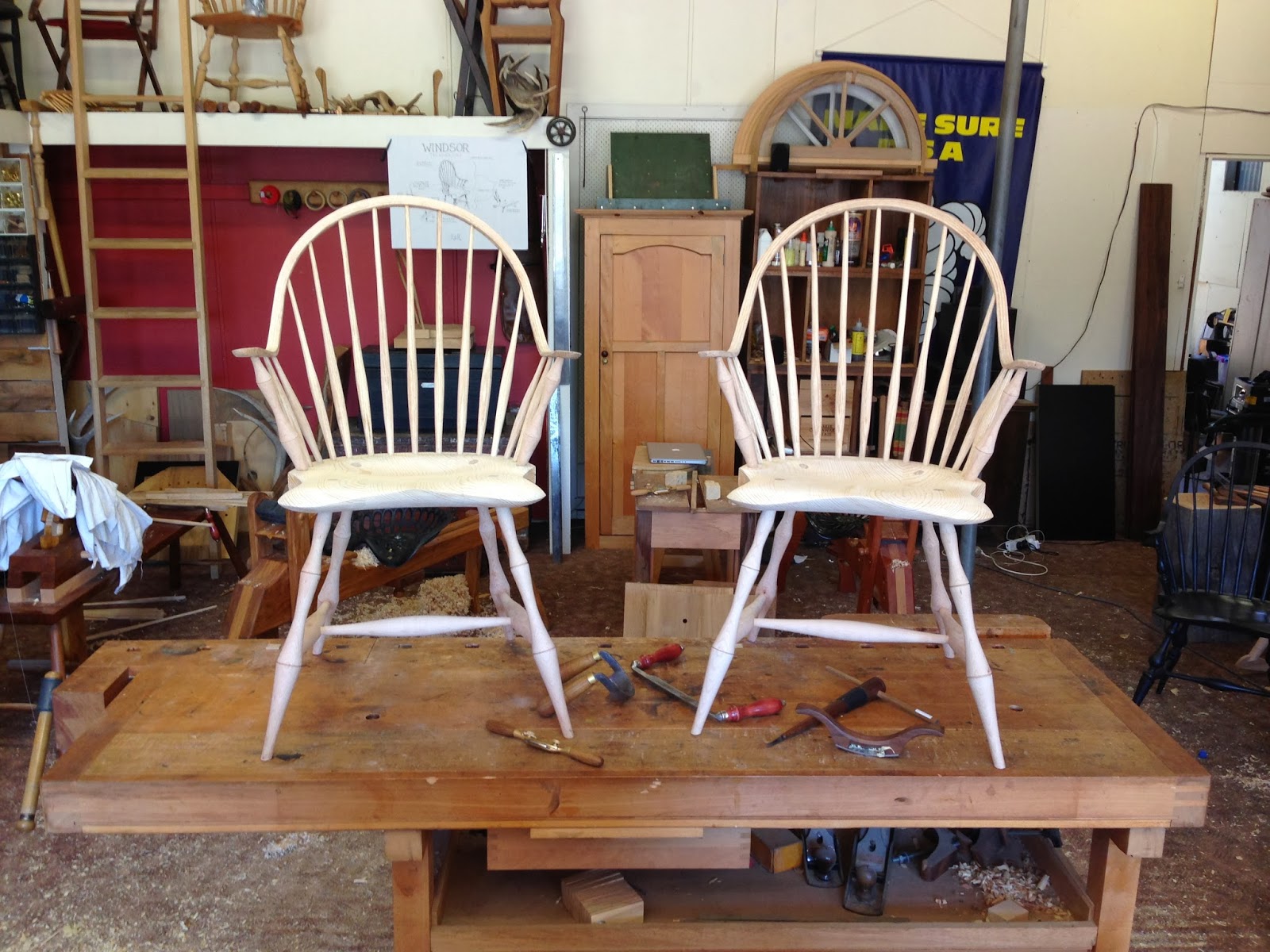 Wendy and Bev, sisters who grew up in Victoria's Western District, came to the workshop to make a Continuous Arm Chair each. And did they ever. Two very fine chairs indeed and in record time. The class is formatted as a seven day class to allow for any contingencies or issues that may arise.

Well suffice to say Wendy and Bev worked so efficiently that they glued up their chairs around 5pm on the 6th day. Considering the 7th day was 40+ degrees it was great to be in a position where all that was required was to put some finishing touches to the chairs. We even had a chance to talk in greater depth about Milk Paint finishes and other detail. Thank you for a great week ladies. 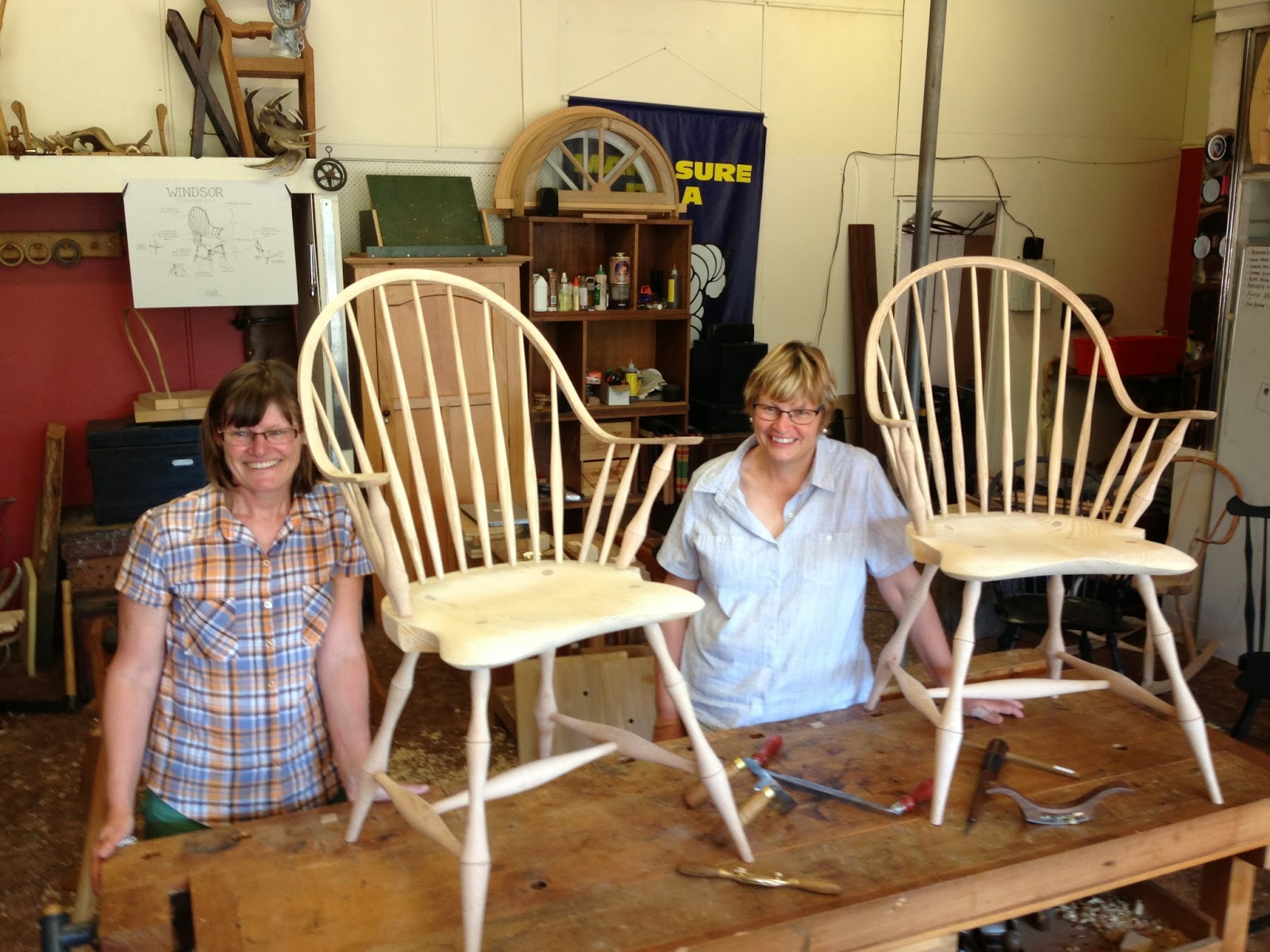 While I'm on the topic of classes, Lisa and I are very pleased to announce that for the second time we will be bringing Peter Galbert out to Australia to teach another 3 classes in December this year.

I'll go into further detail in the coming weeks, but suffice to say, if you were ever considering making your first windsor chair or re-visiting the process for a second time, don't miss this opportunity. Outside of packing your bags and taking 20 hours of flights to Massachusetts, this is the only way to experience chair making at it's very best. Stay tuned!
Posted by Glen Rundell at 06:30 No comments:

As the 3rd week of 2014 comes to an end I'm just starting to get back into the swing of things and put my head down ready for what promises to a busy year. As I write Lisa tells me that we are booked out for about 85% of all classes we have advertised thus far. Makes us think that we are doing something right….

But with booking chair classes comes the ever present search for suitable green timber to enable the classes to run. Not much of an issue if you're living on the East coast of the States, where species such as Red Oak grow large and 'straight' in abundance. The latter also being a fundamental necessity for good chair parts. As a furniture maker I look for the most figured timber I can find, wild grain, burls, crotch, spalting, etc. As a chair maker I look for the parallel opposite, I want dead straight grain, with not the slightest defect, knot, branch or bark inclusion and certainly nothing resembling crotch!

But as anyone who has taken a chair making class with me will know, not too many Australian native species lend themselves anywhere near as well for the windsor chair making process as say the U.S. Oaks. Or if they do, most of the straight examples are deep in our state forests or national parks….. i.e: unavailable.

Most natives growing in open or private land act as trees do in those conditions. They do not have to reach for the canopy of the surrounding forest for sunlight and as a result, bifurcate or branch out in all directions. They're most often also affected by wind and or growing on uneven ground and therefor have an off centre heart or a lot of internal tension.

However, here in Kyneton we are very fortunate that a hundred or so years ago, a lot of the settlers in the area, in fact the whole Goldfields region, planted deciduous species that reminded them of home.

The Kyneton Botanical Gardens is a great example of this. At the end of the gardens, down towards the bend in the Campaspe River, is an area known as the 'Fairy Ring.' 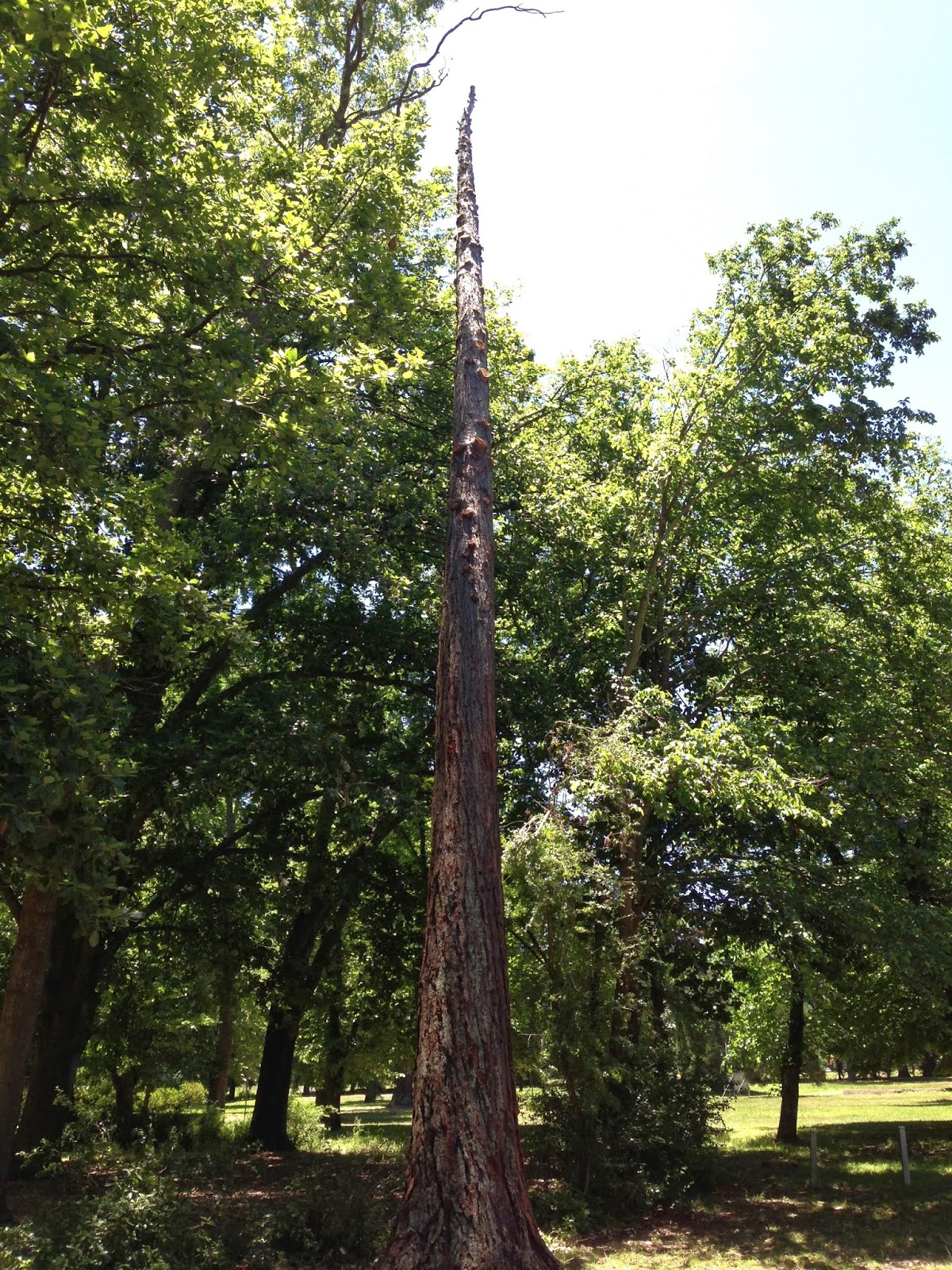 For the longest time, a Californian Redwood has leaned precariously over the area, threatening to fall over. Alas it was eventually decided that the risk of the tree falling was too great and it had to come down. Above is the tree stripped of all its branches and foliage.

This thing was large, not half as big as some others in the gardens, but large all the same. Thankfully I received the call that the tree was coming down and it was offered to us. As grateful as I was for the opportunity to have such a precious log, it was something else that was earmarked to come down at the same time that really grabbed my attention.

Pin Oak. Quercus Palustris. A member of the Red Oak family and this one was growing under the canopy of a very large English Oak, so it was long and straight. It's just out of camera shot in the above photo, but you can see how dark it is under the English Oak. 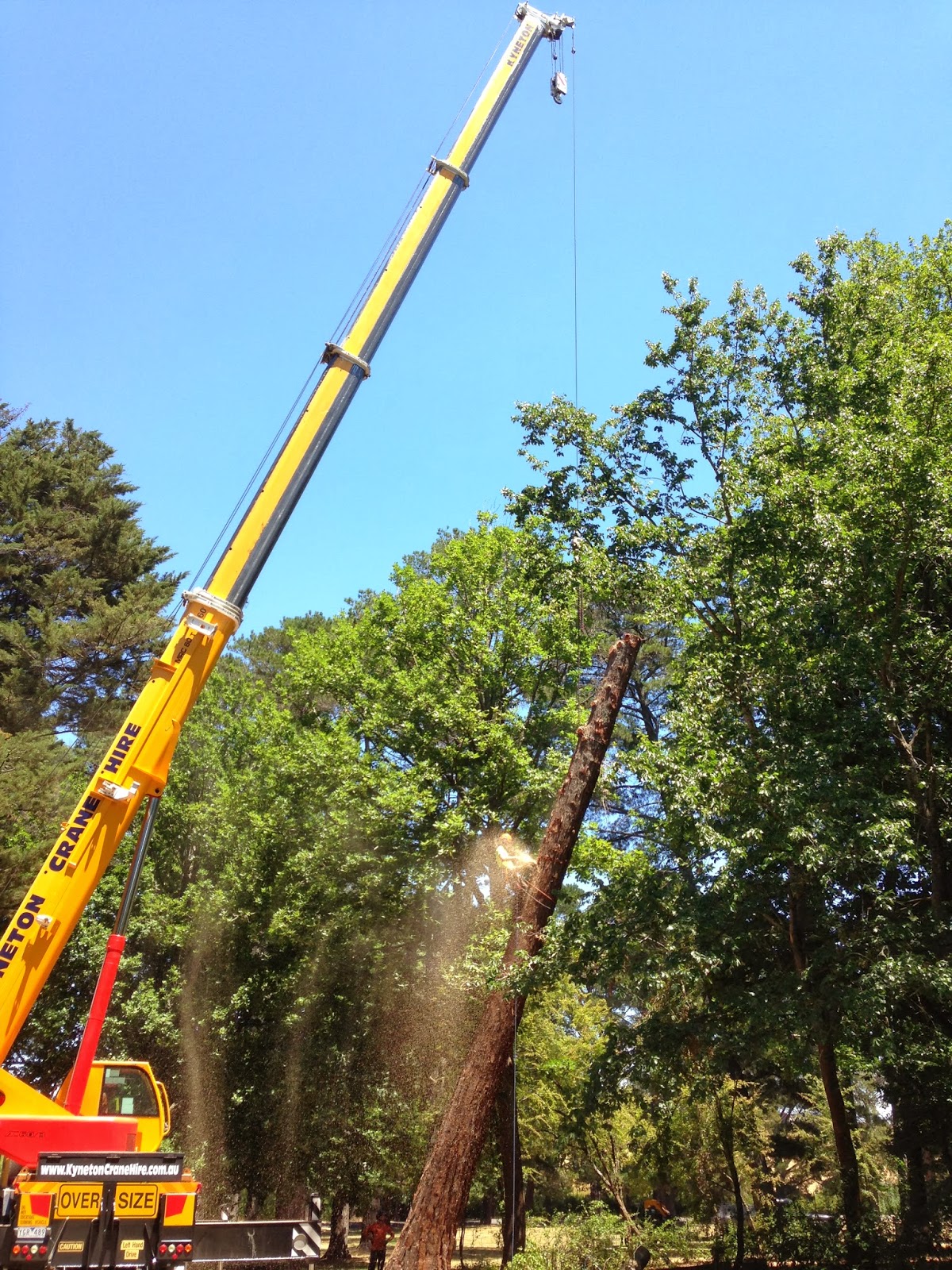 On the day a crane was bought in to ensure the safety of the workers involved and to limit damage to surrounding trees. Yes that's the arborist two thirds the way up, on the chainsaw. And then taking the last of it down on the ground. No, it's not hung up on anything, it's actually falling at this point….. You can see some of the Pin oak log already on the ground in the background. 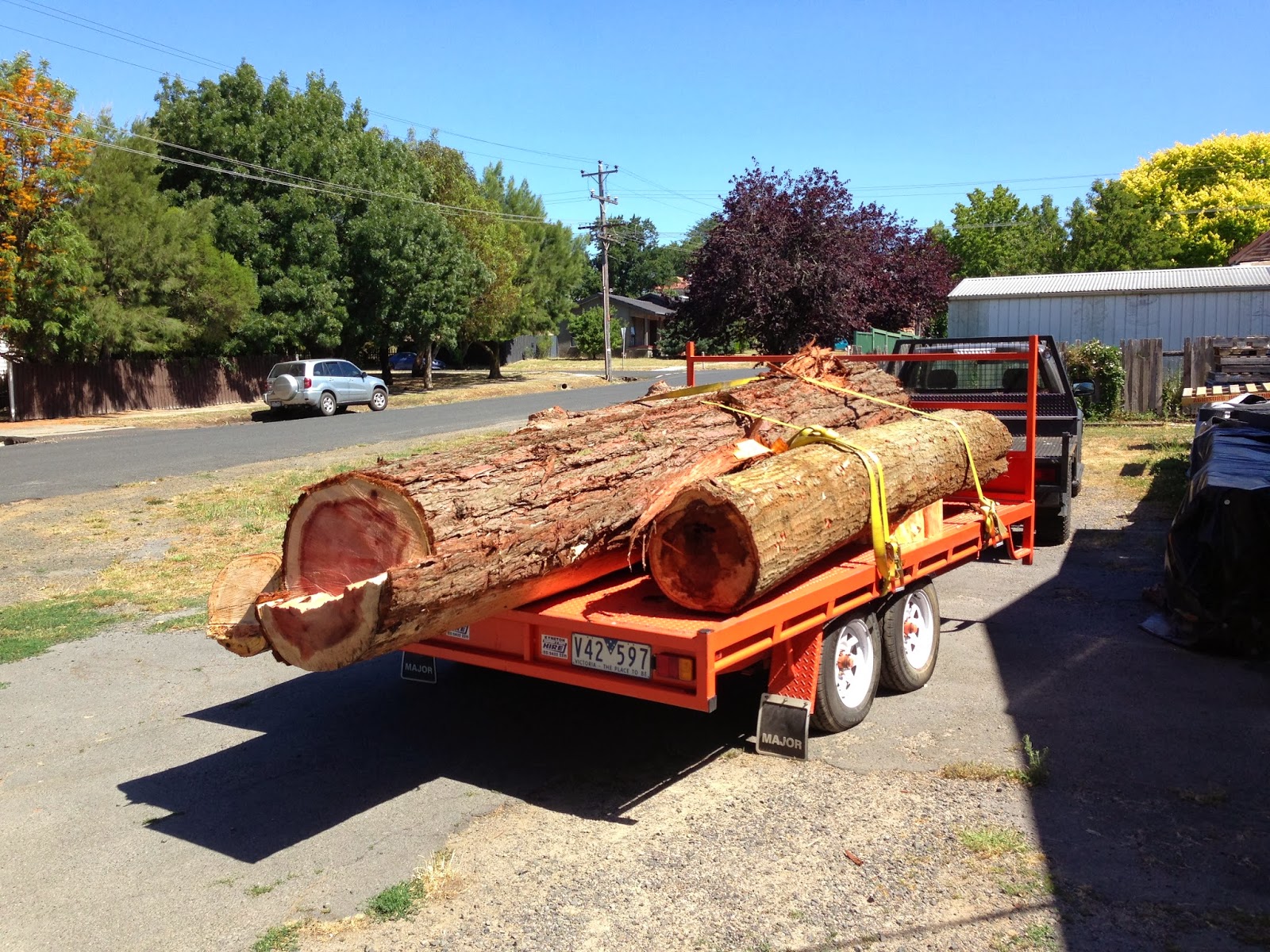 We collected 7 logs that afternoon from the gardens. Logs that would otherwise have been broken down for firewood or mulched. Above is the second section of log from the trunk. As you can see, they're a lot bigger when they're on the ground! And there next to the Redwood is the Pin Oak for our February Continuous Arm Chair class. Straight and with a central heart. Just the ticket.
Posted by Glen Rundell at 05:53 3 comments: