This morning I focussed my efforts on removing some of the detritus from the inside of the shop, in preparation for our opening next weekend. As some of you may remember from my post  back in July, there have been some fairly average alterations to the building. That's being diplomatic. Time and money wise we haven't time to renovate the shop front in the same manner as we have with the cottage, from the ground up. But as a friend Kath ( stylist to the stars! ) said to me the other day, people aren't coming to look at the floors walls and ceiling, they're coming to look at what's between them. .....and I don't think she was talking about the studs and noggins! 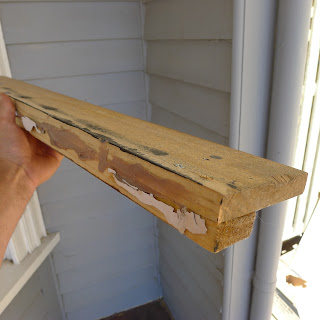 So with trustee cordless drill in hand I began to remove the hundreds of bugle head plaster screws that held in some rough cut pine that was cobbled up as a 100mm shelf on the wall above some faux panelling. Said previous owner should have been the poster boy for Selley's because for every 10 screws he jammed in, he used a tube of No More Gaps or Liquid Nails as well. My sincere hope is that the building doesn't fall over when I remove all the liquid nails! 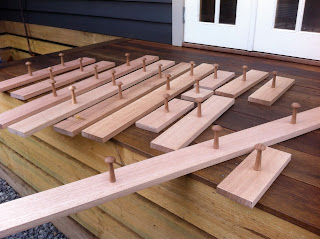 So in place of the rough pine I headed to the workshop, grabbed up some Elm off cuts and whizzed up 25 Shaker pegs. The shop isn't having any theme, Shaker or otherwise, it's just that they are such a handy thing to have on the wall, especially for hanging all manner of 'smalls' , bags and things. With the rails pre-cut I glued them up ready for Milk Painting and fixing this evening. 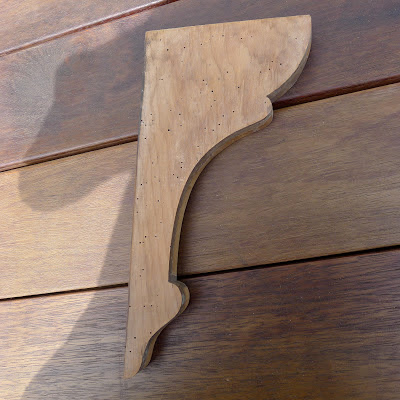 A long while back I picked up an old wooden bracket/shelf support that had been long ago discarded and left to the borers in a shed. It was such a nice shape that I held onto it until I had the right use for it. 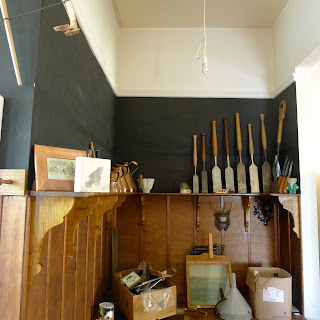 Today I cleaned it up and used it for a  template to make another 8 for a shelf behind the counter, replacing more Pinus Horribilus. A very simple Pin Oak  top and job done.

This afternoon at the cottage the last of the peg rail was painted and fitted into the bathroom, with Huon Pine Shaker pegs. It's the last piece in the puzzle and means I can finally remove every last tool from the place and concentrate on furnishing it. At last. 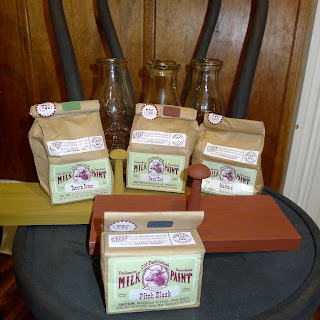 Great colours, not too flash in your coffee....

Another late night of painting at the shop but it's coming along well. On that note, as an opening special we are offering our current stock of Original Milk Paint Co. product at the reduced rate of $13 per pint package, down from $15.

I was the first to bring the product in to Australia nearly 3 years ago, for my own use and for other chair students and haven't raised the price since.  Recently I heard from an old customer that there are others bringing in the product now too and charging $25 a pint for it! Pretty outrageous really at nearly two and a half times the retail price in the U.S.

Tomorrow, time permitting I will list a few of the unique classes available for 2013 at our new workshop and factory, just a short stroll from the shop, cottage and Piper Street. It's a great space, indoor and out with plenty of parking and plenty of inspiration too!
Posted by Glen Rundell at 07:14