Working on the cottage over the past 9 months or so has really been an eye opener. For a number of reasons. It's not the first home I've renovated, I've done more than a few for us and have helped renovate more than I can recall for others.

Timing is one aspect. There was never a rush previously. In fact final touches were put on most of our previous homes just before we sold them. Money is of course another, it's an expensive business, especially if you are sub contracting out all of the trades, therefore I've been attempting to do as much as I physically can across the board.

Styling. I use that term specifically as we have chosen to set out the cottage in the 'Shaker style.'  Of course it cant be authentic as I'm not a Shaker and we're on the wrong continent for a start.

But more specifically, it's building and decorating as accurately as the historic references allow. Then,  in the absence of any previously known details or examples its putting together the missing pieces sympathetically, as you might expect original Shaker carpenters and furniture makers might have. 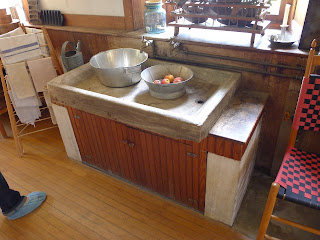 There have been a couple of occasions where I could simply find no reference to an item, or perhaps it did not exist in a Shaker community at the time. For instance we had to take some liberty when it came to the kitchen, as the kitchen in the meeting house at Hancock had a trough like sink on a stand with a couple of garden taps over it. Not the answer for someone coming to stay and wanting a clean and functional kitchen. There is also the issue of current building and plumbing codes and regulations. 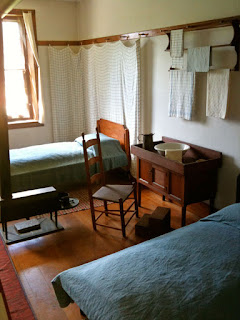 This week it's the curtains and rods. I've seen several examples of long curtains that have hung on the peg rail but again it has to be practical and there would be a number of people who simply could not be bothered hanging individual tabs of curtain on to pegs, especially on 5 windows, so a curtain rod is required. 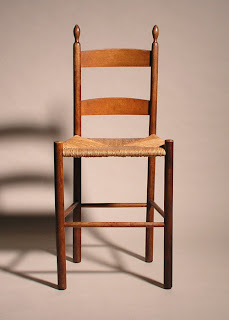 Searching books, hundreds of photos and the internet turned up not one useful image.  So I settled on a wooden 28mm rod, strong but not oversized. I then drew up a simple pattern for the rod holders, as I needed at least 10 and 16 if I end up doing the French doors too. Lastly the curtain rod ends. Stopping the rod in the rod holders looked wrong. Rounding the ends of the rod, too modern. So I again referred to other known Shaker wooden ware and furniture and thats when it became obvious. A ladder-back type finial. 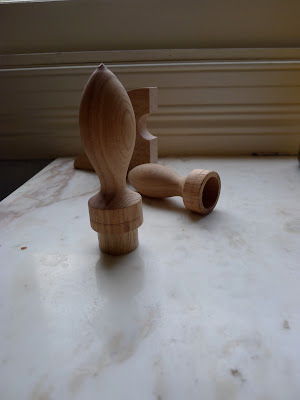 So with not much more than the diameter of the curtain rod in hand I headed off to the workshop again. I pre-drilled a blank of Blackwood on the drill press, giving me the 28mm female socket. This also provided an accurate centre for the tailstock drive. The rest was simple, just turn off all the wood that doesn't look like a finial ! When I removed it from the lathe it looked just fine, so I turned another just to be sure. Another 8 to go then I can hand over the reins to Mrs. Rundell to make the curtains!
Posted by Glen Rundell at 13:50