The new year kicked off in country style this year with our first visit to the annual Glenlyon Sports Day. For those a little further away, Glenlyon is one of many little satellite Goldfield era towns, about 20 minutes from us in Kyneton.

Good friend Pete Trott had told us about the day and I'm glad he did. The event card went something like this.

Suffice to say it was a bit of good country fun. In fact Pete's wife Jess entered the mineral water drinking championship and downed her pint of murky local mineral water in a healthy 5.10 seconds, holding the lead for a short time until a newcomer came along and took the lead with an unbelievable 4.89! 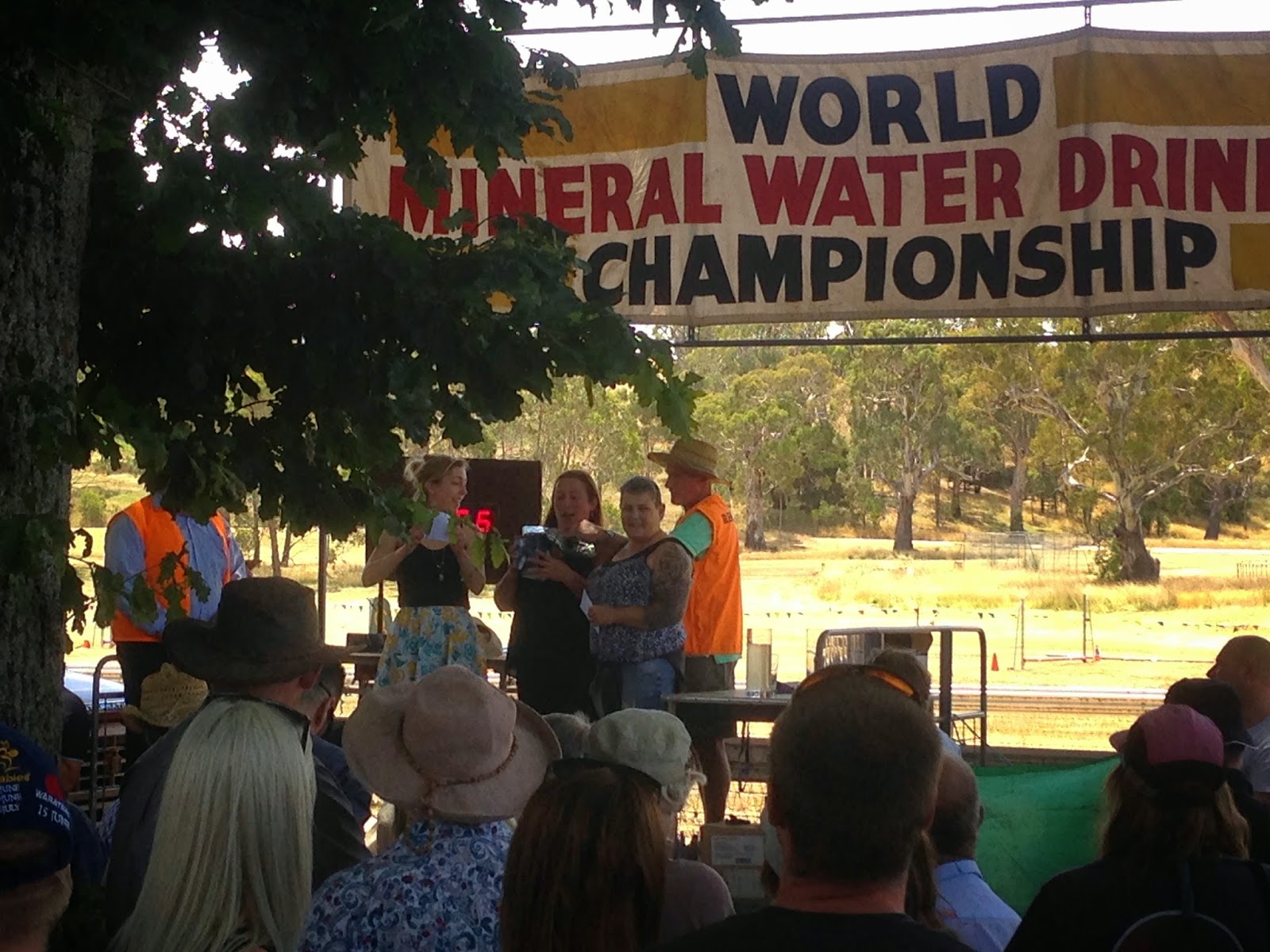 Jess on the left, deservedly accepting her 3rd prize!

The wood chop as is usually the case, was a great competition too. But on the day there was one fella who dominated the Underhand Comp. My feeble old mind has forgotten his name now, but in the video below you can see him second last in the line, in the Green singlet.

He even had time for a breather, before the last bloke is finished! 21 seconds through a 1 foot round Mountain Ash block. Impressive.

Yesterday before the heat drove me out of the corrugated iron workshop again, I managed to get a start on the cupboard doors for the kitchen. There were 2 original cupboards in the Pineville kitchen when we bought it. Both frames had been destroyed by termites, but the old doors were still in tact. 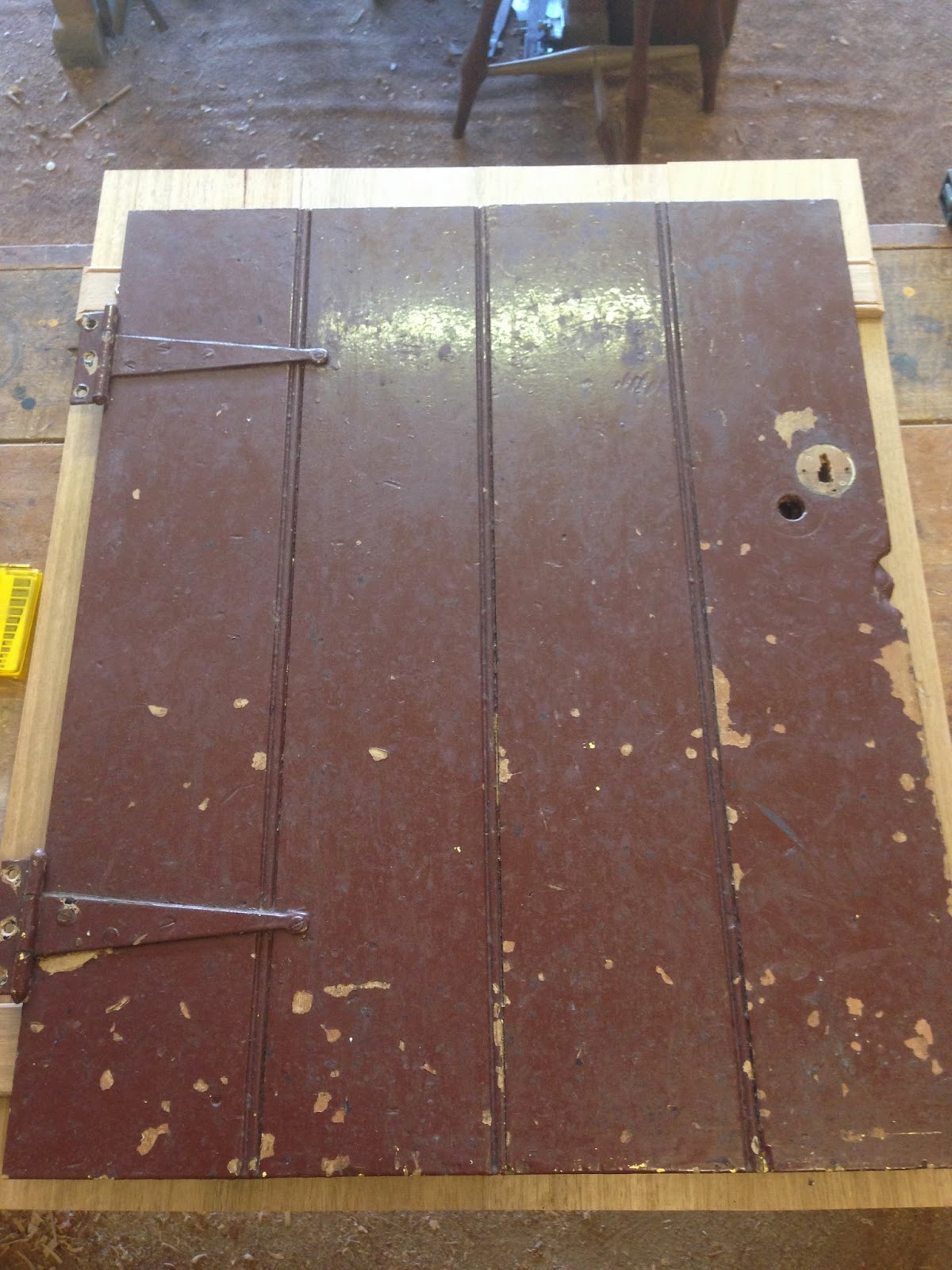 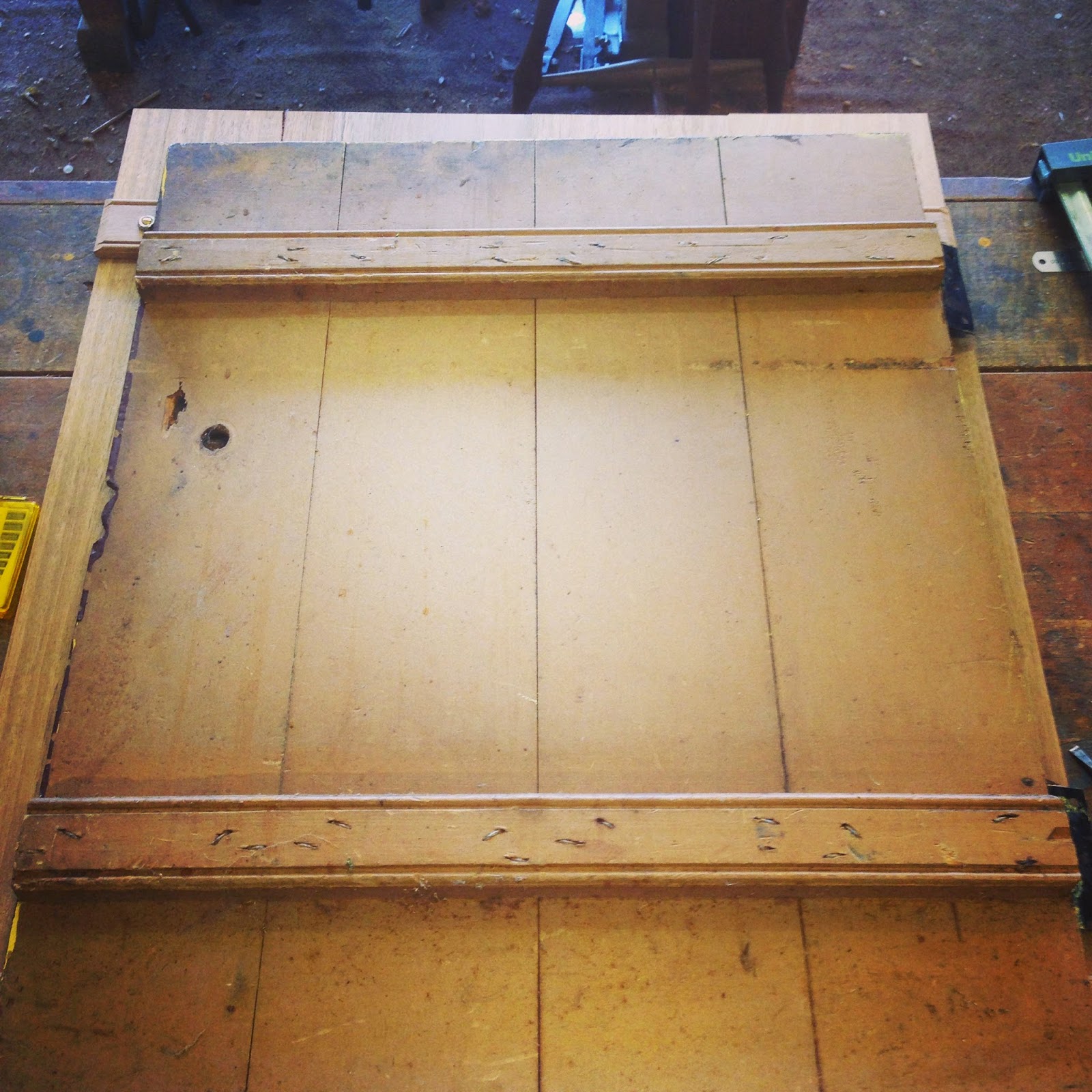 They are a simple but very traditional door. Hand-beaded panels, held together by back braces or cleats which have been clinched together with cut nails. Although they sound very agricultural, and they may be, they are still as solid as a rock. Part of the secret why is due to the nails allowing wood movement, flexing where glue and or screws would not. They are also very light in comparison to a frame and panel door of the same size. 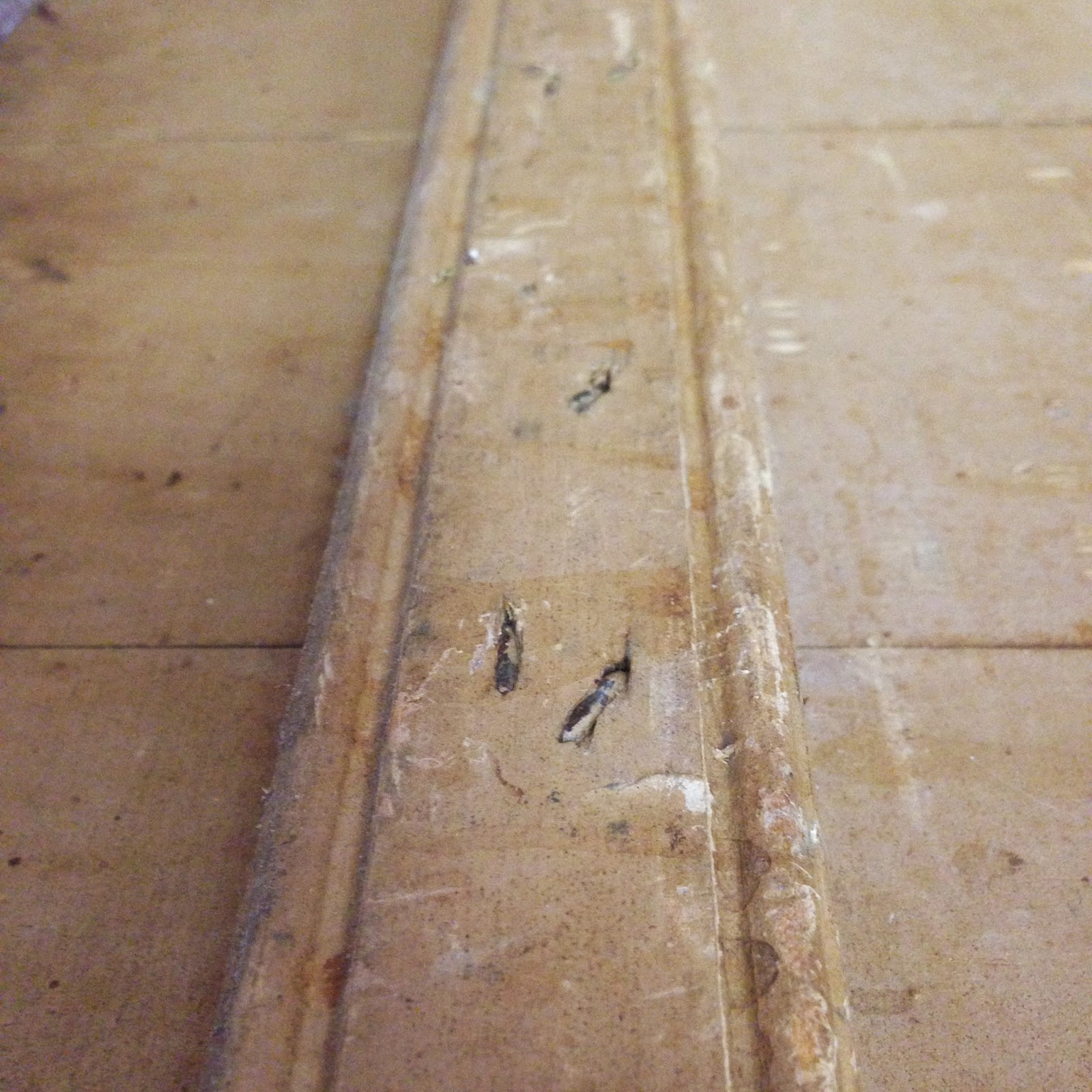 Here's the detail of the clinched nails and the bead, cut with a moulding plane.

For my doors I'm going to use the hardwood internal clap-boards I managed to rescue from the internal walls of the main house. They were fixed tight up to shoulder level then spaced out to the ceiling and were a fixing platform for hessian, which then had the wallpaper applied to it. A lot were turned to dust by termites but we still managed to retrieve a good pile of them. 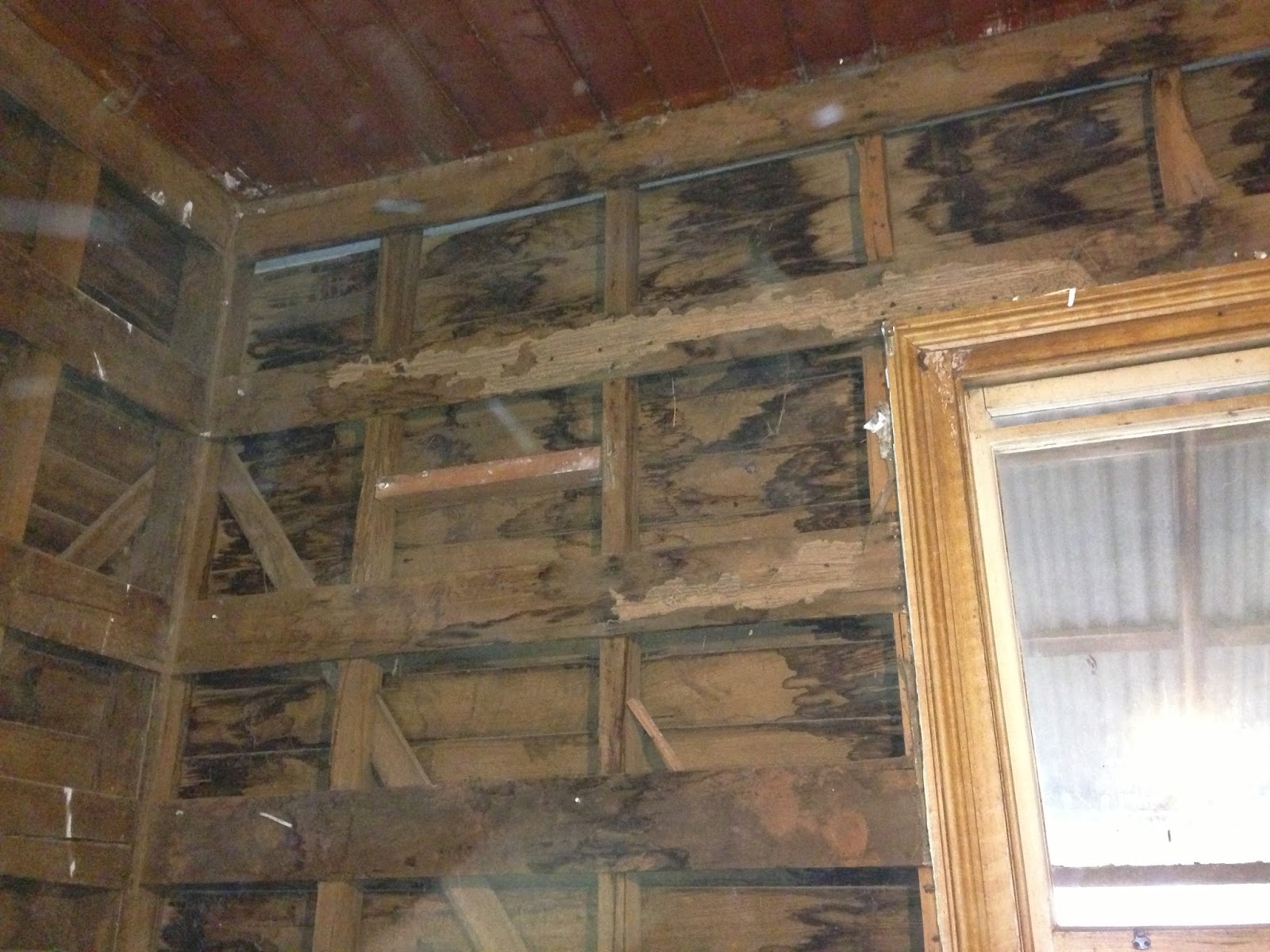 The first step was to remove the myriad of fixings buried in them over the past 160 odd years. There were cut nails, wire nails, brass pins, large flat head steel tacks for the hessian and lastly gal. clouts where plasterboard was nailed on. I then had to pick through most of them to find a good straight section over 750mm (29" 1/2 ) long. Given that I had to joint and thickness them, there couldn't be too much curve or wind in them, as I still wanted to finish with at least 9mm ( 3/8" ).

With the stock docked to rough length, jointed and thicknessed, I wanted to make up a sample door to try on the carcasses we've already fitted in the kitchen. So I wasn't wasting stock I've screwed together the prototype, so we can pull it apart and adjust it if need be. 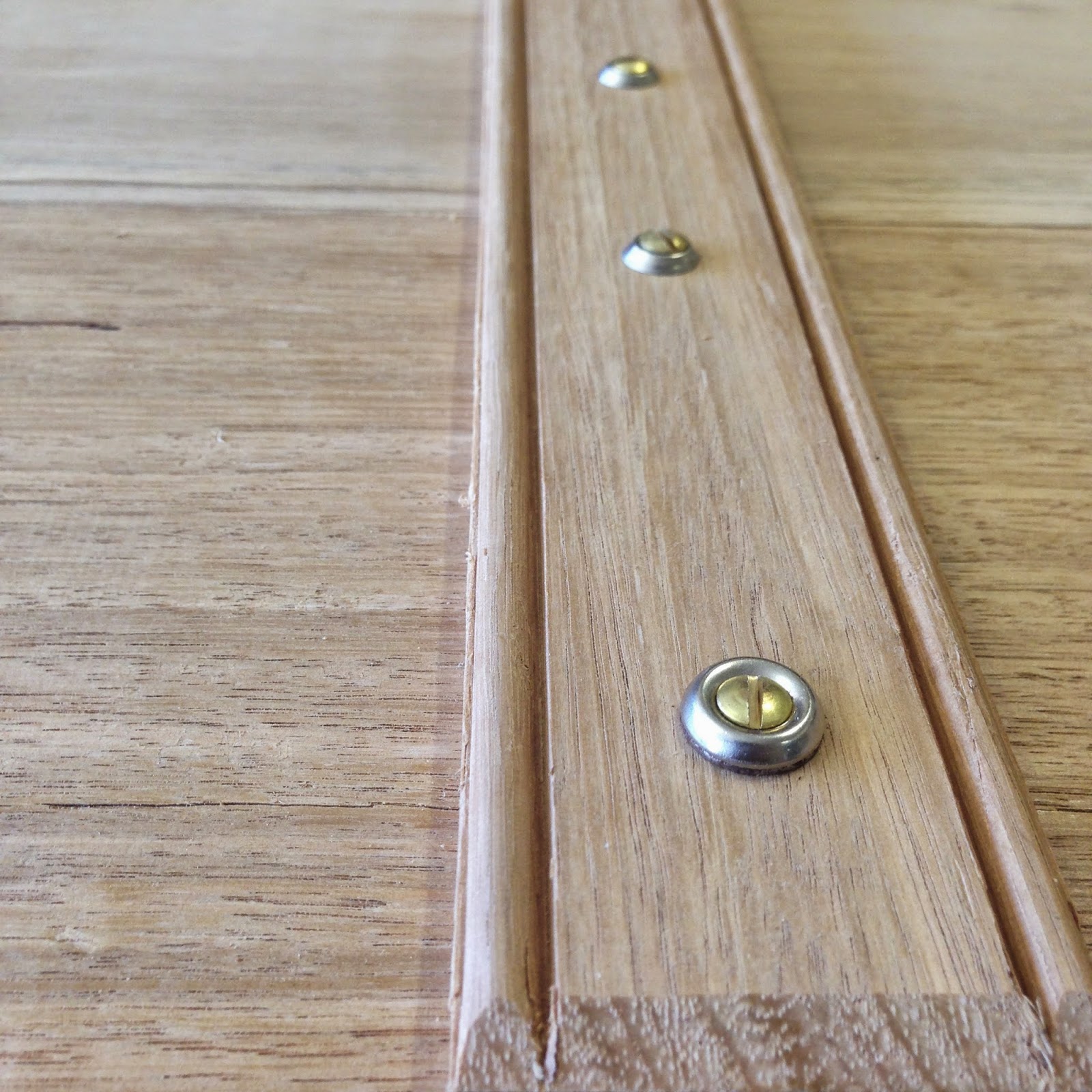 So here's the cleat fixed with screws and screw caps. I only used the caps as I didn't have screws on hand that were short enough not to poke through both timbers. As you can see I also made up a very simple scratch stock to put a bead on the cleat. It worked fine but was a time consuming process in this very hard old timber. I've ordered a 1/4" beading plane from Caleb James to do the actual doors, which is winging its way across the Pacific as I type. It's a terrible burden to 'have' to get such lovely tools to make a kitchen…….. =)

The handles for the doors will be a very simple affair and the shape have already been determined by the single remaining draw pull on the original kitchen cupboard. They are about 36mm round, quite shallow in depth and I'll through mortise & tenon, glue and wedge them to the doors and drawers.

Today is a day of rest I'm afraid, as the town and most of country Victoria braces itself for the possibility of bushfire. It's 40 celsius + here today, with strong winds too. Far to hot to get into the workshop.