New lessons on an old chair. 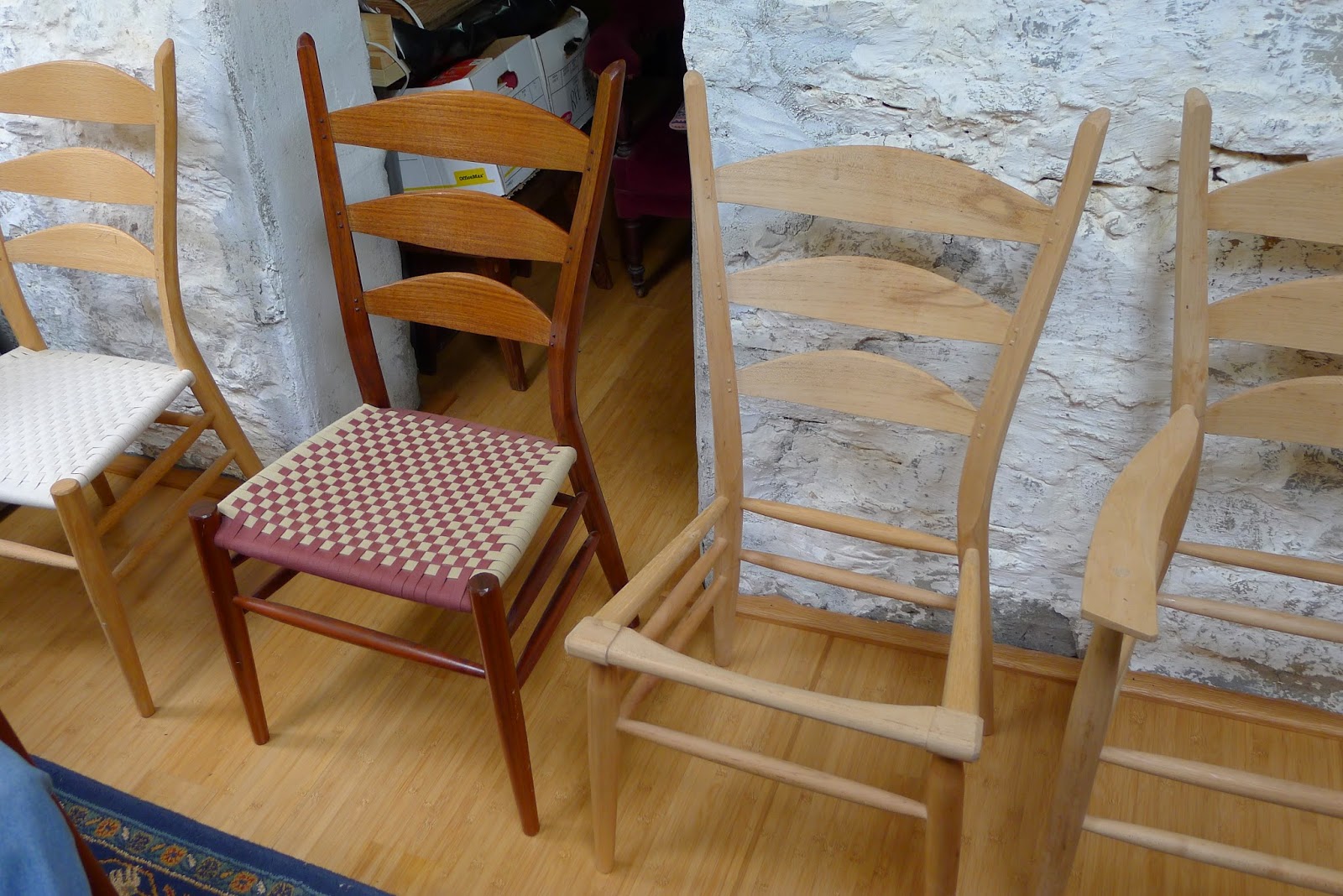 A few Jeff made earlier….

On the first day at Jeff's workshop we were shown the various incarnations of a 'Boggs style' 3 rung ladder back chair. Prior to teaching the chair to others Jeff had taken numerous classes with Brian to learn how to make a variety of these chairs. From Greenwood versions to the complex rocking chair. Jeff stressed to us from the start that the class was not the same as taking a class with Brian. It soon became apparent why.

After a short time leafing through the extensive manual provided by Jeff and looking over the array of well made jigs, it's evident that Jeff has analysed every part of the chair down to the last detail and set it out in a clear and comprehensive manner. Being a graphic artist by profession, Jeff's computer rendered manual is about the most analytical I've seen. It puts mine to shame, that's for sure.

Now I don't intend to go through every minute detail of making the chair as I don't think it would paint a realistic picture of the process. Instead I thought I'd provide an overview of the weeks class and a pic here and there. 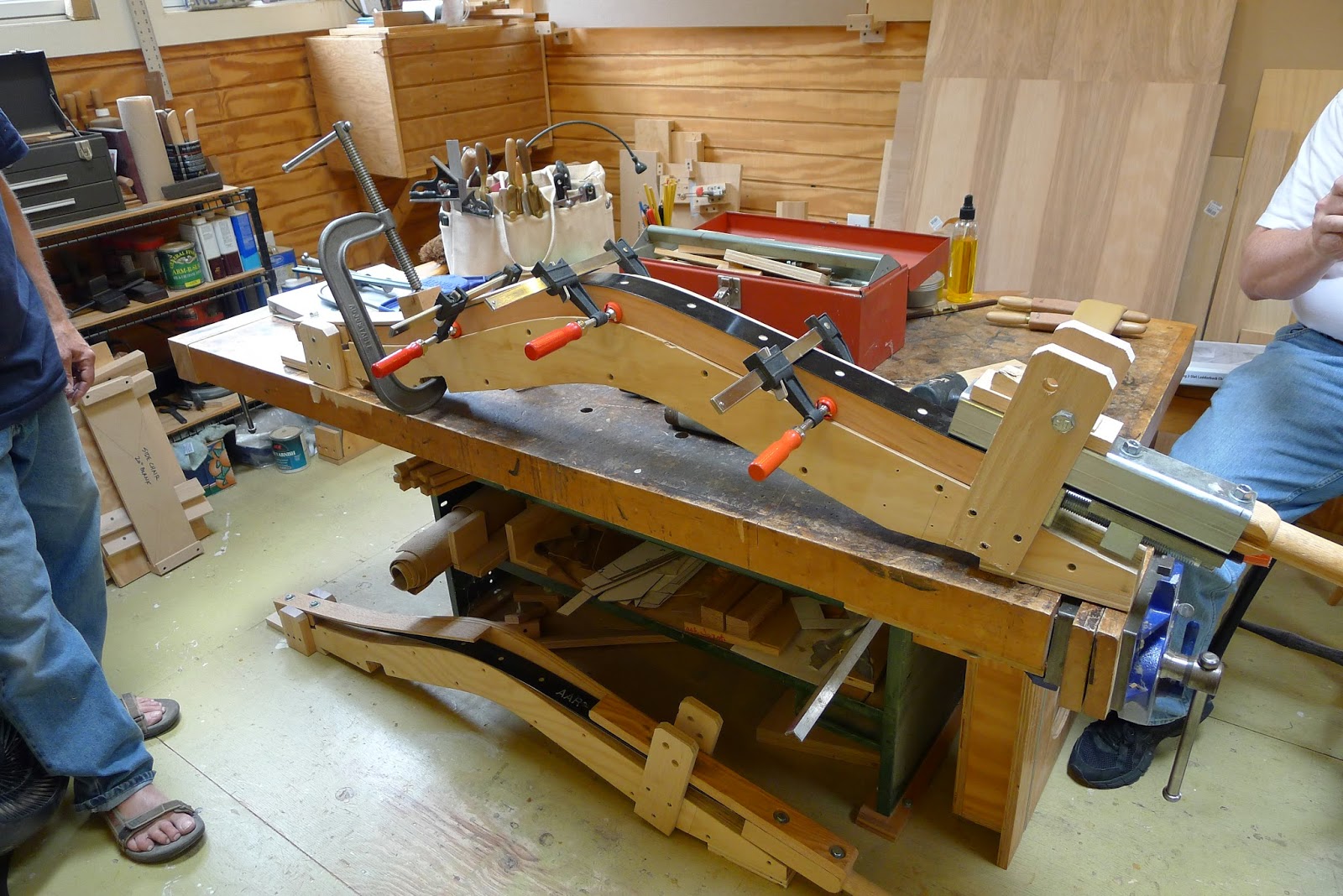 The first task was to prep the back legs for steam bending. We had that done and the parts in the steamer prior to lunch. These parts are thick and were in the steamer for about 2 hours. After lunch they were bent, as previously stated, in a very well made bending form and left for an hour or so before being moved to a drying form to set. This bending jig is a beast and really makes short work of bending a comparatively large section of wood. It's hard to see here but under the heavy black steel strap sits another stainless steel band to stop the wet wood reacting to the iron and leaving black marks.

After this the back slats are bent too. 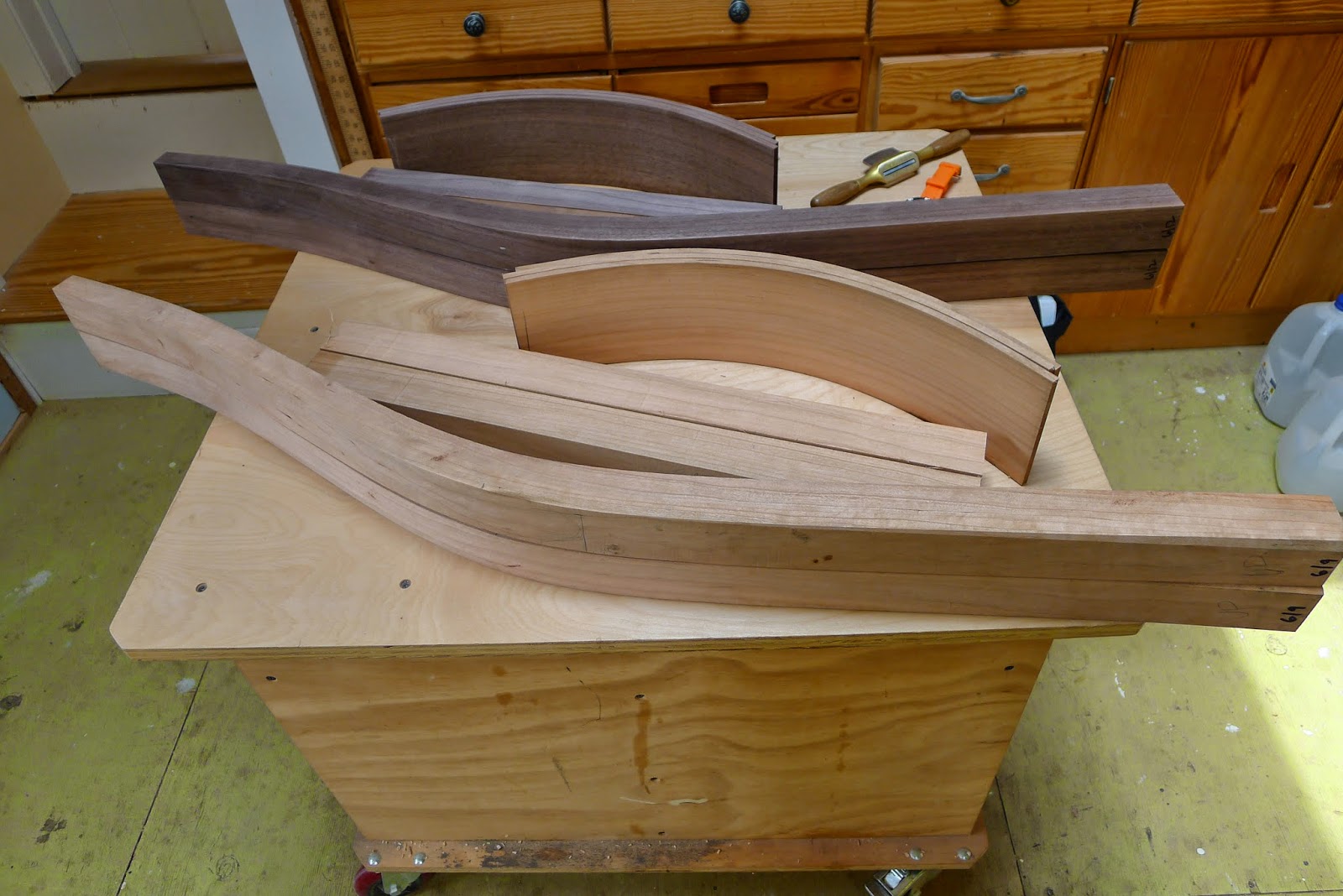 Cherry for me Walnut for Tony

As the legs take a few days to dry, and work needs to commence on those legs straight away,  Jeff had already prepped our respective legs days earlier and had them dried and ready for us. The legs and slats we bent would be used by a future student. Hope you like them whoever you are!? Legs are then further milled and tapered. 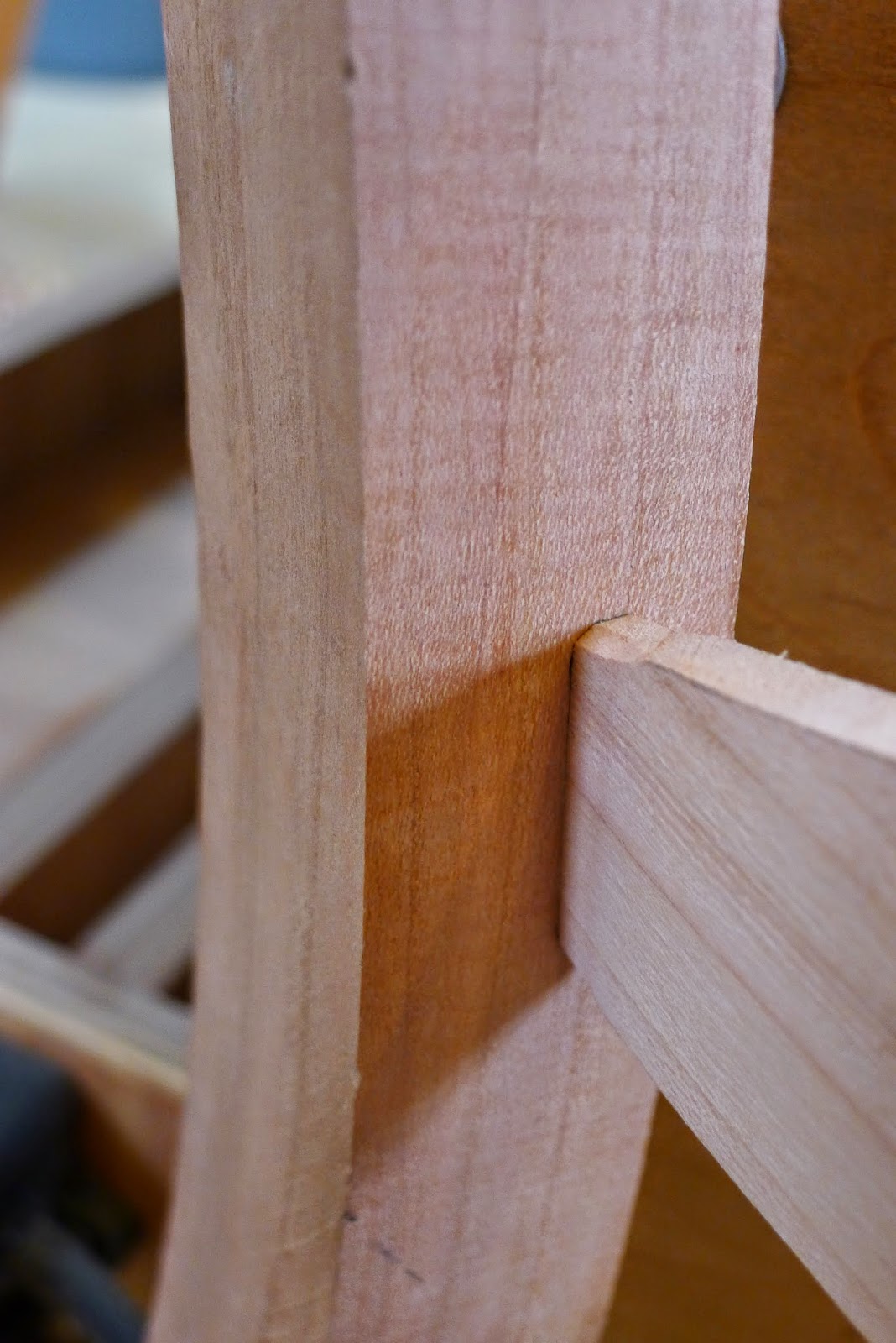 Day two consisted of mortising the tops of the legs , again with a well made and simple jig Jeff had devised. This went quickly and without issue. Slats were measured, marked out and the process of rough shaping and fitting them began. To say Jeff aims for a close fit is an understatement. No 16th's, 32 nds or millimetres here, its all about hundreds of thousands of an inch and to a tolerance of a couple hundreds of a thou.  Yep a bit of a side step from my usual method of shaving a spindle with a spokeshave until it fits in a hole in a block of wood! I can't say I raced through this, but the final fit was great. Tony certainly showed me how it was done here. 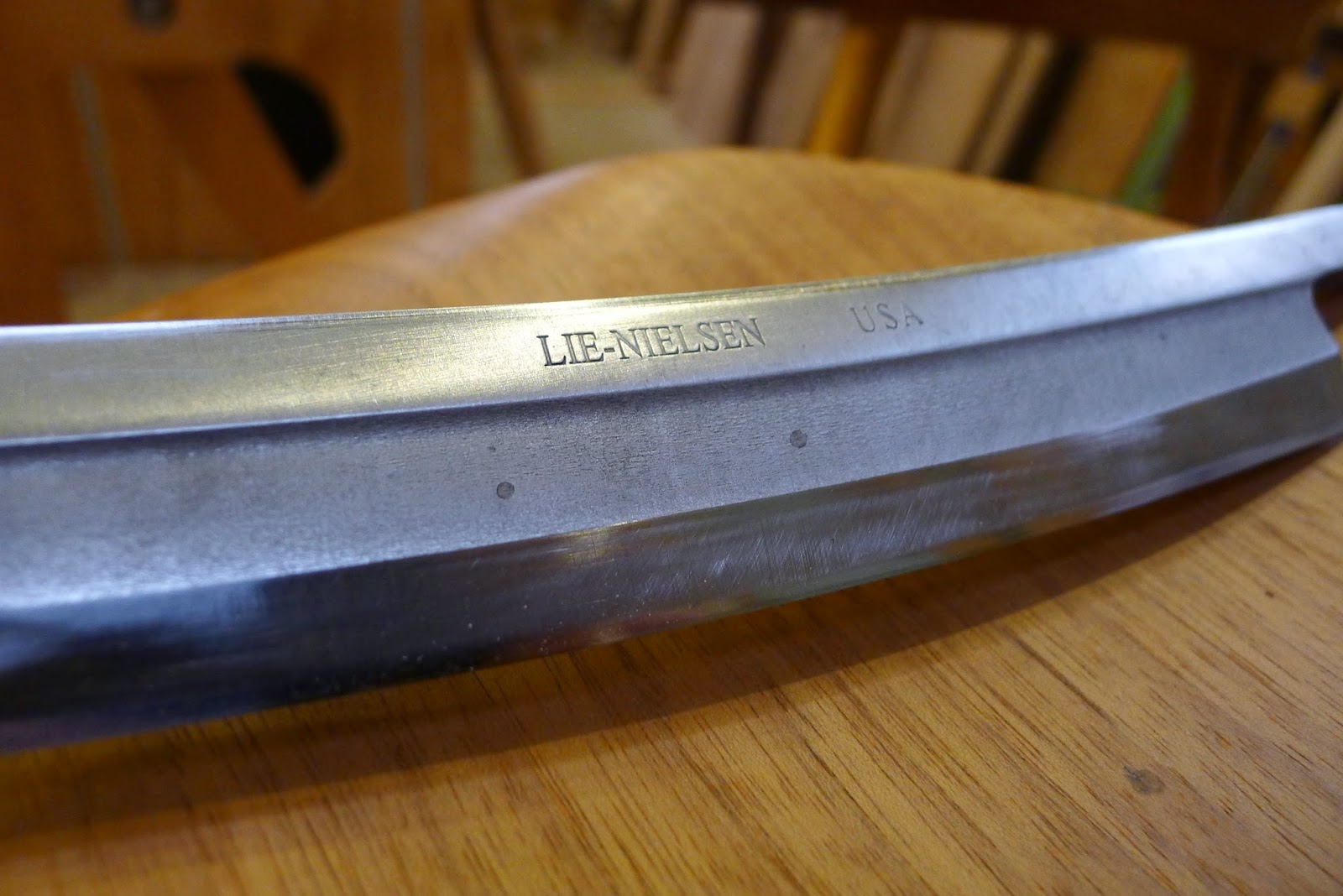 That afternoon however we saddled up in the shave horse and rounded a 'practise' front leg from square to round. Same principle as spindles here and it felt good to be on the business end of a drawknife again. Jeff had one of Lie Nielsen's drawknives, which was a nice knife to use.....and shiny too. 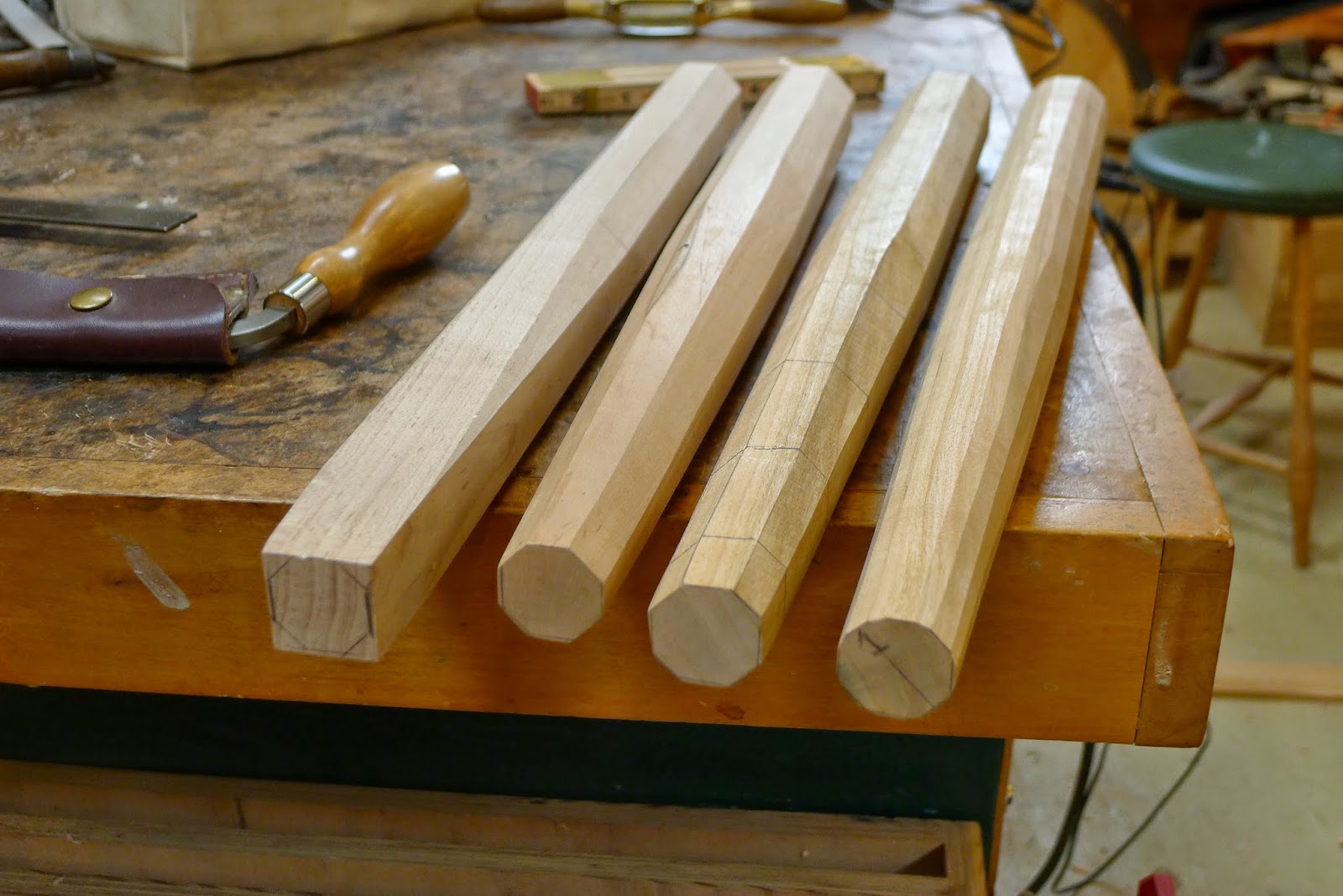 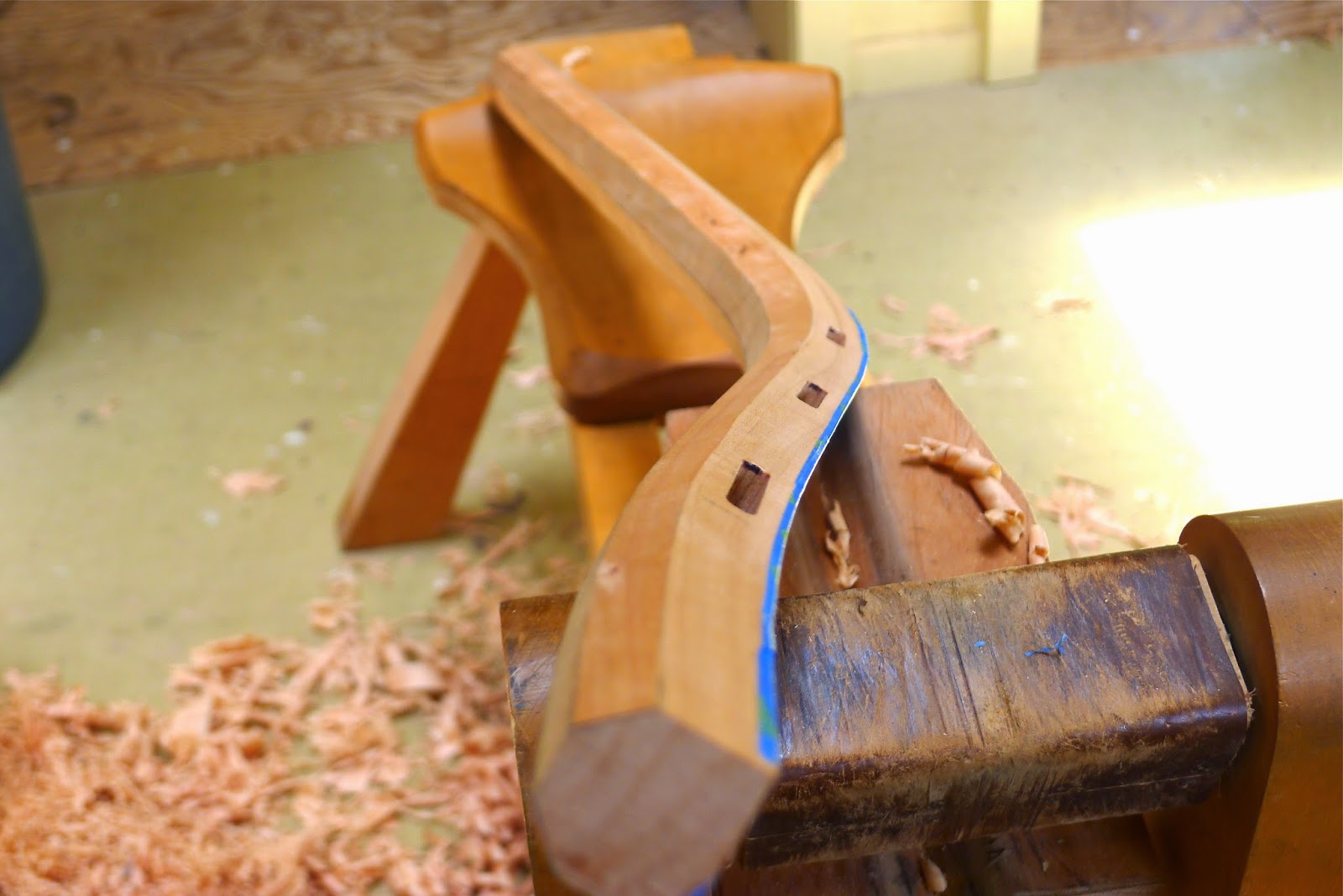 Day three began with rounding and shaping all the legs front and back. Given that the back legs are no doubt a focal point on these chairs, a care is taken to mark them out and shave them very accurately throughout all the steps, square to octagon, tapering, then to 16 sides, etc etc.

Once the legs were rounded and scraped smooth it was rung mortising time. I found this part very interesting as it diverged from the process I was familiar with of finding the relationship of the stretcher to the leg and expressing it in degrees or the Galbert method of utilising a generic angle to both mark and drill the mortise. It's a great way of finding and expressing angles and works well utilising a drill press. But I want to do it justice in explaining it so please tune in for the next post.